Rights advocate urges democracies to step up in Trump era 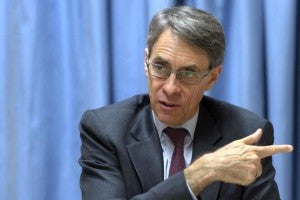 Kenneth Roth, Executive Director at Human Rights Watch, speaks to the media, during a news conference at the European headquarters of the United Nations in Geneva, Switzerland, on Wednesday, Jan. 25, 2017. (Photo by MARTIAL TREZZINI/KeystonE via AP)

GENEVA — The head of Human Rights Watch has expressed concern “we will lose the US voice as a defender of human rights around the world” under President Donald Trump, and urged other democracies to “take a leadership position.”

Kenneth Roth of the New York-based advocacy group says he fears some repressive governments will use the opportunity of Trump’s accession to power to crack down on dissent.

Speaking to reporters in Geneva, home to the UN’s Human Rights Council, Roth said Trump’s “expressed admiration for strong men” and his nomination of Rex Tillerson as Secretary of State, “who has yet to show any interest in human rights,” were worrying.

Roth said he expects Trump to start refilling the Guantanamo Bay detention facility “just as a matter of making a point.”