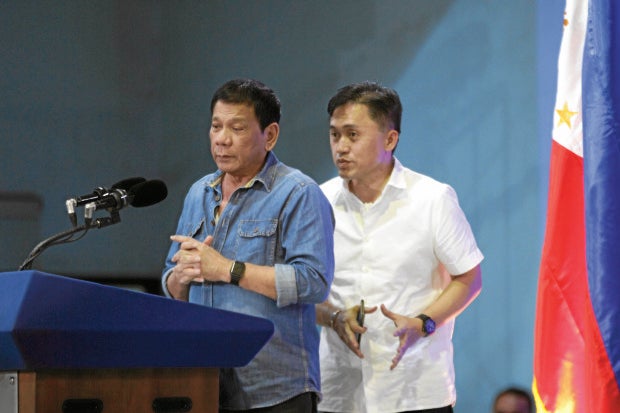 TACLOBAN CITY, Leyte — President Rodrigo Duterte has a stern warning to public officials: Make sure they work for eight hours a day and not sit on applications and referrals.

Otherwise, he would slap erring officials with administrative charges – ranging from neglect of duty to even swindling.

In his speech during the turnover of 1,100 housing units to Yolanda survivors in Tacloban on Wednesday, Mr. Duterte said applications at the regional director level should be acted upon within 15 days while at the Cabinet level, 30 days.

Permits should be released within three days, he added.

“Pag-ayaw mo (If you won’t do so), I will charge you for neglect for duties either simple or serious,” President Duterte said.

“I will charge you administratively. Huwag na yun criminal kasi matagal. (No more criminal case because that would take a long time.) Dereliction of duty, then I can suspend you. You can go to court and I will be happy if you will go to court,” he added.

The President was here on Wednesday to lead the turnover of housing units for families who lost their houses when Supertyphoon “Yolanda” barrelled through the city in 2013.

The practice of government officials of not serving a full eight-hour duty as well as delaying the release of permits and applications should stop, said Mr. Durterte.

According to the President, indolence is so rampant among public officials to the detriment of the public that they are supposed to serve.

“Magka-prangkahan na lang tayo dito (Let us be frank). Problem in the government is indolence, tamad (lazy). And most of the people in government take for granted the people’s interest,” he said.

“Pagkatapos ng panginudto, lalabas, hindi na magbalik (After eating lunch, they would go out and would not go back for work), even in Manila. You see them going around malls, mag-pasyal lang  (just taking time off, strolling and enjoying),” he said.

“Kayong mga directors, kung may referrals sa iyo, simula ngayon (You directors, if you have referrals, starting now), it is your duty to expedite (these) because I will only give you, director, 15 days to do it,” he said.

“Magpakamatay ka sa trabaho mo, huwag kang umalis sa opisina mo hanggang di mo matapos (You should kill yourself over your jobs. Don’t go out of the office until your work is done),” Mr. Duterte said.

The President stressed that government officials and employees have been paid to render eight-hour work.

“So if you do not go back in the afternoon, you are short-changing government,” he said.

“Actually, that is swindling. You are swindling the government and that is punishable under the Revised Penal Code. It’s known as ‘other deceits’,” Mr. Duterte said.

He also told the mayors to do the same.

If they could not follow his order, they better resign, the President said.

Several Cabinet officials attended the ceremony that was supposed to start at 2 p.m. but began at 4:30 p.m. because the President was late.