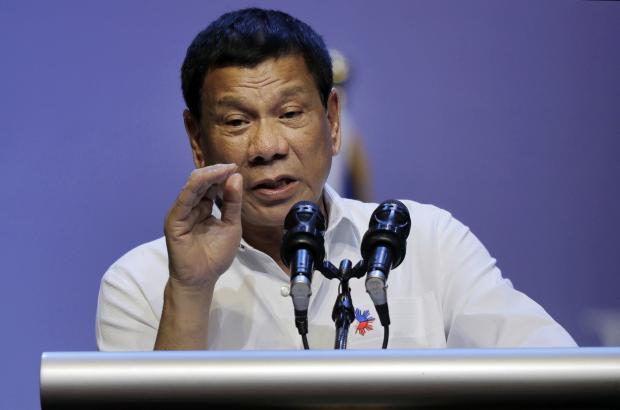 MANILA — The Catholic Church is “full of shit,” according to President Duterte who ramped up his attacks against priests and bishops in the Philippines, on Tuesday, by accusing them of corruption, womanizing and other excesses.

In a speech peppered with profanities in reference to the church leaders, Mr. Duterte encouraged his audience composed of families of slain Special Action Forces to read the book “Altar of Secrets” by the late journalist Aries Rufo to know the sins of the church officials.

“I challenge you now. I challenge the Catholic Church. You are full of shit. You all smell bad, corruption and all,” Mr. Duterte said on Tuesday.

He dared the Catholic Church officials in the country to resign and said he would do the same if they would bite.

The President went off on the Catholic Church leaders after he defended his war against illegal drugs during a speech in Malacañang Tuesday.

Church officials have been vocal in condemning the extrajudicial killings that had attended the administration’s crackdown on the narcotics trade.

According to Mr. Duterte, he and the Catholic church officials have the same sin— that of womanizing. He noted that one bishop— Bishop Teodoro Bacani— had two wives like him.

But unlike the church leaders, he is not corrupt, he said.

He chided them for asking for a Pajero during the time of President Gloria Macapagal Arroyo.

“Shouldn’t you be ashamed of yourselves? That’s so expensive and so many people have nothing to eat,” he said.

The bishops knew they were not supposed to receive anything from the government, and yet they asked for the high-end vehicle, he said.

“Putangina, tumanggap ang mga ulol (Son of a bitch, the jerks accepted it),” he said.

“It was pure graft and corruption,” he added.

He said he had been aware of the atrocities of the church leaders even when he was a young boy, and railed against priests who have failed to give service to the poor.

He said he might just write his own book against the church officials, titled “Hypocrisy.”

Church officials call politicians corrupt, and yet, he asked, “how about you?”

Most politicians have been afraid of offending the Catholic church officials, but not him, Mr. Duterte said.

Despite the church officials “politicking” and warning people against him, he still won, he noted.  SFM