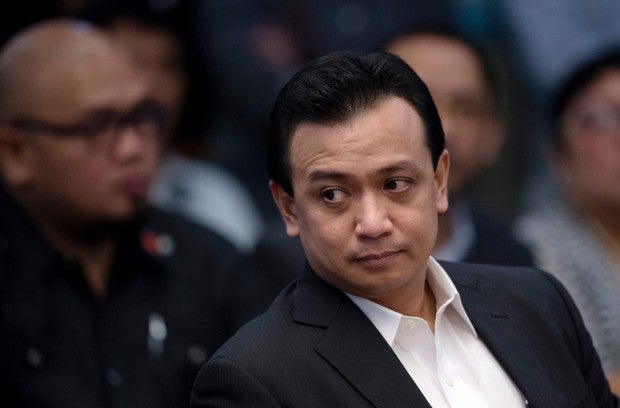 “When the guilty is cornered, he or she usually resorts to name-calling.”

That was how Senator Antonio Trillanes IV reacted on Tuesday after Justice Secretary Vitaliano II called him “sundalong kanin, whose credibility is zero.”

(In the Philippines, soldiers who underperform in battle but feast on military rations are called sundalong kanin.)

“I don’t even know what that (sundalong kanin) means,” Trillanes said.

As to Aguirre’s remark that he had no credibility, the senator said: “I stand by my track record. I haven’t been proven wrong so far.”

The exchange of insults between the two came after Trillanes accused Aguirre of possible involvement in the reported P50 million bribery scandal allegedly perpetrated by some immigration officials.

But instead of resorting to name-calling, the senator urged the Justice Secretary to just stick to the issue.

“There are so many holes in his testimony. Why did he meet with suspects in a case inside a hotel in the first place? Why did Aguirre invite his fraternity brother, Argosino to the meeting instead of Commissioner Morente?” Trillanes said.

He was referring to Bureau of Immigration Commissioner Jaime Morente and former Associate Commissioner Al Argosino, who was present in a meeting at Shangri-La Hotel in Taguig last November 26. Aside from Aguirre and Argosino, also in the meeting were gambling tycoon Jack Lam and two interpreters, and the businessman’s representative, Wally Sombero.

Aguirre said the meeting was sought by Lam’s camp supposedly to negotiate the release of 1,316 Chinese workers arrested last November 24 for allegedly working illegally in the online gaming business of Lam at Clark Freeport in Pampanga province.

After the meeting, Argosino met again with Sombero at the City of Dreams in Paranaque City, this time with former BI Associate Commissioner Michael Robles. It was during the second meeting where Sombero allegedly gave P50 million to the two former officials.

“If Aguirre wasn’t in on the extortion/bribery, why would Sombero give P50 million to Argosino when he knows that Argosino doesn’t have the authority or power to release the Chinese workers,” Trillanes further asked./ac