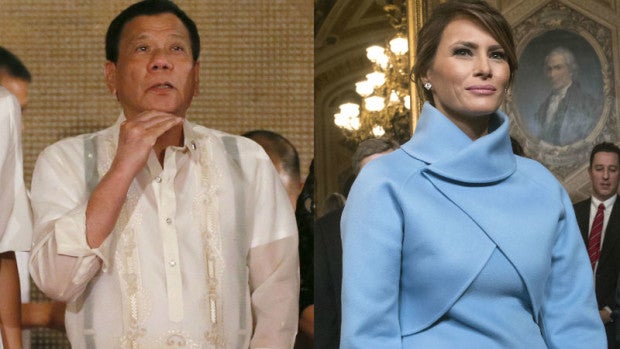 Both are populist leaders catapulted to power by discontented electorates.

Both are notorious for delivering caustic speeches in attacking their critics, particularly the media.

The parallels are evident.

For President Duterte, the only thing that separates him from US President Donald Trump is his “very beautiful wife,” the Slovenian-born former model Melania.

As anti-Trump protesters thronged streets in major US cities and the world’s capitals, Mr. Duterte had only the nicest words for the 45th president of the world’s only remaining superpower.

He also praised the stunning 46-year-old Melania, Trump’s third wife who is 24 years his junior.

“He is a billionaire. His wife is very beautiful. I envy him,” the President said at the birthday party of Director General Ronald dela Rosa, the embattled Philippine National Police chief, on Sunday night at Camp Crame.

“If you’re a billionaire, you speak like that, you became a president, and you have a beautiful wife, then you’re like in heaven already. That’s his edge over me,” he said in a mix of English and Filipino.

Mr. Duterte’s remarks expectedly drew laughter and applause from the crowd, some of whom are friends of Mr. Duterte’s longtime partner, Honeylet Avanceña.

Jee, whom policemen allegedly kidnapped from his home in Angeles City last Oct. 18, was allegedly strangled inside his vehicle just a few steps away from Dela Rosa’s official residence, known as the “White House,” in Camp Crame.

In his speech, the President assured Dela Rosa of his support, saying: “If we want you out, I and the House Speaker will not be here tonight.”

Dela Rosa told reporters that he informed Mr. Duterte during the party about the calls for his resignation. The President reportedly said, “No, mag trabaho ka (you just work).”

“I said, ‘Mr. President, this is President Duterte. May I be privileged to congratulate you?’”

Mimicking the American leader’s accent, Mr. Duterte said Trump told him: “Oh yes! I heard you have (a problem) with the state department.”

“Look at his inaugural speech. He will stop drugs. We’re no different,” he exclaimed. “He’s also tough. He will also kill you.”

“Don’t be fooled by his happy-go-lucky demeanor. He will not be a billionaire if he thinks like that,” Mr. Duterte said.