“The Punisher’s” toughie character proved no match for the charm of a bevy of beauties from the four corners of the world.

An unusually restrained President Duterte on Monday welcomed to Malacañang 84 of the world’s most gorgeous women who were in the country vying for the crown in the 65th Miss Universe competition.

“Before I proceed, I’d like to make an admission that never in my life have I been (in) a room full of beautiful women. This is (both a) privilege and an honor, and I hope that this day will never end,” said the President, drawing giggles from the contestants.

“I usually do not read my speeches… but this time (I will do it) because they told me that I must behave in my language, in the adjectives that I would be using to characterize or define your beauty,” he continued.

“And I must say that God is really good. Aside from the worries of governance, with all the troubles in the world, when we look at you, we forget the universe, but (think about) only you.”

Of the 86 Miss Universe contestants, the representatives from Finland and Switzerland failed to attend the courtesy call on the President for health reasons, according to Tourism Secretary Wanda Teo.

“They have to rest upon doctor’s advice. They’re not used to the hot weather,” Teo told reporters.

She said the President had been invited to the coronation of the winner in the early morning of Jan. 30 at SM Mall of Asia Arena in Pasay City.

“But he has not made any commitment (to attend),” Teo said.

He acknowledged the contest for providing each competitor a chance to “represent your country, promote your advocacies and advance women empowerment to a greater audience.”

Lifting from the famous line of Indian freedom icon Mahatma Gandhi, the President said: “More importantly, this is a chance for you to make an impact, to inspire change and even be the change that you wish to see in the world.” 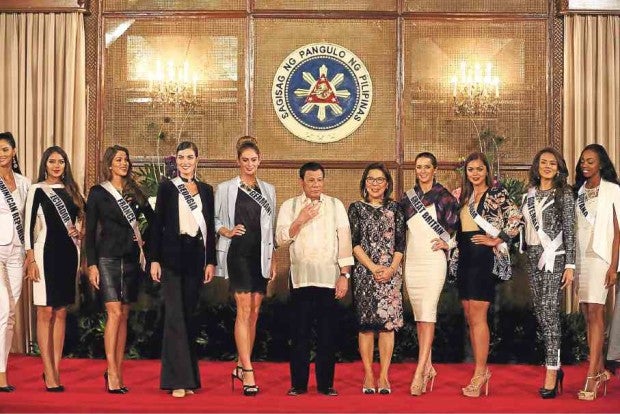 BEAUTY QUEENS AT THE PALACE President Duterte poses for a picture with Miss Universe candidates, who called on him in Malacañang on Monday. —JOAN BONDOC

“It is truly a great honor for us to be sharing (with) you our most beautiful destinations, including the rich culture and history behind each of these gems,” he said.

“And I am equally confident that our host communities and the Filipino people would themselves have given and will give each candidate many precious memories to hold on,” he added.

Before ending his four-minute speech, the President raised a glass of water and drank a toast to the Miss Universe contestants’ “beauty and brains.”

He also gamely posed with the contestants and shook their hands during the photo session.

At one point, the President lifted his head with his left hand to emphasize how tall his special guests were.