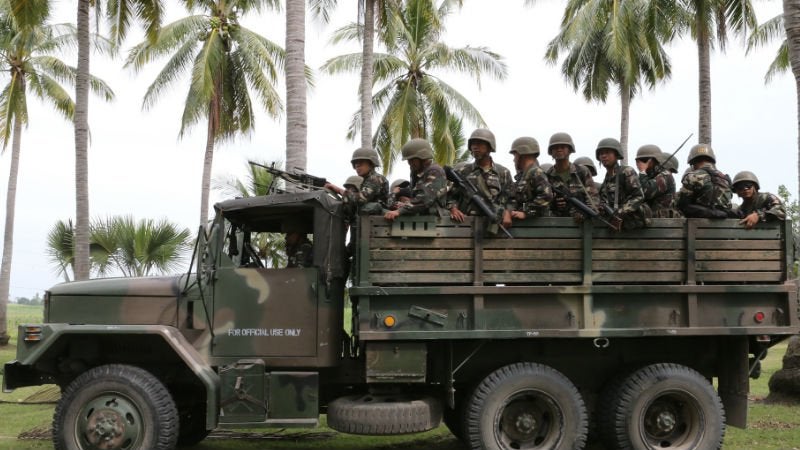 The military’s 10th Infantry Division said in a statement that a combined team of soldiers and police clashed with armed men in Barangay Biangan at 5 p.m. Saturday. Fighting lasted for an hour.

“After the 30-minute firefight, the troops recovered three high-powered rifles, several personal belongings and a dead body of an unidentified man at the encounter site,” the military said.

The AFP said that on January 20, government forces were responding to a report of rebels commandeering a vehicle of the Santos Land Development Corporation (SLDC) in the village of Malasila.

“The driver of the ten-wheeler truck reported that the armed men fired at him and threatened that the management will suffer the consequences if they fail to give in to their extortion demands. After which, the armed men forcibly took the key of the said truck and escaped immediately,” the military said.

But the New People’s Army said the military was provoking and pursuing them despite the ceasefire and peace negotiations.

“At around 5 in the morning yesterday, troops from the 39th IB-AFP arrived at Sitio Concepcion, Barangay Kisante, Makilala and launched offensive operation towards Sitio Lokatong in Barangay Biangan where an NPA unit was encamped. Having monitored the enemy’s movement, Red fighters promptly maneuvered to avoid armed encounter,” Rigoberto Sanchez, NPA-Southern Mindanao spokesman, said in a statement.

Sanchez said that government troops caught up with the NPA where a firefight erupted leaving one communist and eight soldiers dead.

“The war dogs of the 39th IB and the entire AFP cannot wash its hands clean of this flagrant violation of their own ceasefire: Sitio Lokatong in Brgy. Biangan is a remote area that their presence can only mean an offensive operation against the NPA,” Sanchez said.

“Furthermore, they fool no one by claiming that their combat operation was merely in response to reports by local authorities of the presence of lawless groups: for the entire day, they actively maneuvered to engage the evading unit of the NPA,” he added.

Sanchez said that since August last year the military has maneuvered in North Cotabato with them deployment of peace and development teams.

“It, likewise, continued to mobilize its troops and paramilitaries in various forms of combat operations such as intelligence gathering, combat and psywar in far-flung areas that resulted in harassments; extra-judicial killings of civilians Rita and Norberto Gascon ‪on September 13 in Arakan, and Rolan Malignan ‪on November 22 and the forced evacuation of several families in Magpet on December 6,” Sanchez said.

“The Duterte government must know by now that it is the bullish insincerity of its armed forces to continue its counter-insurgency campaign that is the biggest impediment in the quest for just and lasting peace,” Sanchez commented.

Both peace panels are still mum about the incident but they said that they would investigate it and act on it in the context of the negotiations.  SFM