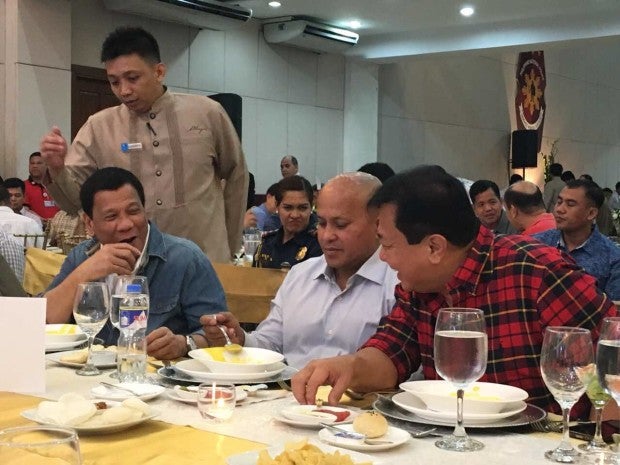 President Rodrigo Duterte on Sunday came to the defense of beleaguered Director General Ronald “Bato” dela Rosa, rejecting calls for the Philippine National Police (PNP) chief to step down over the killing of South Korean businessman Jee Ick-joo by policemen.

In a palpable vote of confidence, Mr. Duterte attended his longtime security aide’s 55th birthday party on Sunday night, which was held at the PNP Multipurpose Center in Camp Crame, just steps away from the area where Jee was allegedly strangled to death inside the businessman’s vehicle.

“He stays there. Bato has my complete trust,” the President said in a television interview.

Mr. Duterte also assured the public that the policemen implicated in Jee’s kidnapping and murder would be prosecuted.

Earlier on Sunday, calls went out for a purge in the PNP, beginning with the courtesy resignation of Dela Rosa.

Local Government Secretary Ismael Sueño told reporters he would support any inquiry, either in the House of Representatives or in the Senate, into the killing of Jee to improve and professionalize the police service and avoid similar incidents in the future.

Sueño said he met with Jee’s family to express his condolences and promised that heads would roll in the PNP.

“I have personally asked the PNP chief to continue to monitor the case, as well as to accelerate the investigation and ensure that all police scalawags involved in the incident, particularly SPO3 Ricky Sta. Isabel, be meted with appropriate sanctions in accordance with the rule of law. The speedy resolution of Mr. Jee’s case is the best justice that this country can give to his family and to the South Koreans right now,” Sueno said.

He added that his department and the PNP “will not tolerate any illegal activity within their power and jurisdiction, as they will never allow acts that will tarnish the image of the entire police institution, the ongoing campaign against illegal drugs, corruption and criminality.”

“Similarly, we will not let these few rotten members of the PNP undermine the gains of the anti-illegal drugs drive, particularly ‘Oplan Tokhang,’” Sueno said.

Saying the Korean case was “a big blow to the PNP,” Rep. Romeo Acop of Antipolo urged Dela Rosa to submit his courtesy resignation.

Acop, a former PNP chief superintendent, said the PNP should have cleaned up its ranks first when Mr. Duterte announced his antinarcotics campaign when he took office in July.

Jee was abducted in October last year allegedly by policemen who claimed the Korean was involved in illegal drugs.

A suspect, SPO4 Roy Villegas, gave harrowing details of the abduction and murder in an affidavit submitted to the Department of Justice after it was discovered that the victim had been killed and his body cremated.

According to Villegas, Jee was killed by Sta. Isabel, on the night of his abduction. The murder took place near Dela Rosa’s official residence in Camp Crame. Sta. Isabel allegedly wrapped the victim’s head with packaging tape and strangled him.

Later, Sta. Isabel turned over Jee’s body to an accomplice who brought it to a funeral home in Caloocan City where it was cremated.