What will the MRT-LRT common station be called? | Inquirer News
Close
menu
search

What will the MRT-LRT common station be called? 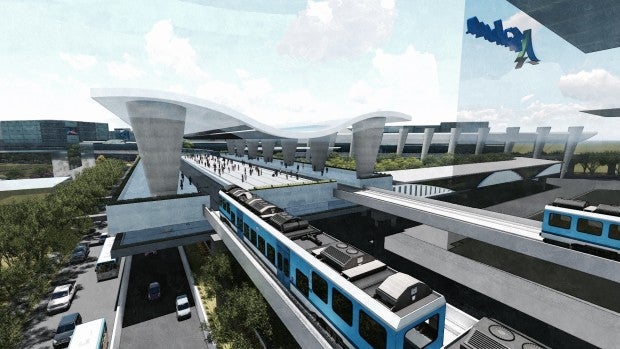 Now that an agreement has been reached for the construction of the P2.8-billion railway common station project, the public might be wondering: What would it be called?

Department of Transportation (DOTr) spokesperson Cherie Mercado said both SM North Edsa of the Sy family and Trinoma of the Ayala family, which fought over the common station’s prime location, have naming rights for the project. It would allow commuters to stroll between the two malls as it linked three of Metro Manila’s main railways.

For now, Mercado said the project will temporarily be called the Unified Grand Central Station. The Supreme Court halted the construction of the project in 2014 after SM Prime Holdings contested the new location near Trinoma.

In an interview with Radyo Inquirer 990AM, Mercado said the DOTr will honor SM’s naming rights, which it paid for P200 million in 2009. Ayala’s Trinoma Mall, meanwhile, shelled out P150 million for the project’s construction, which Mercado said also made it eligible for naming rights.

(SM gave P200 million for the naming rights back in 2009 which they won’t take back. That’s their contribution but they want to maintain their naming rights which they paid for, so we are going to honor that.)

(For now, it’s the unified grand central station, but it can still be changed because we need to incorporate the naming rights of SM and Trinoma. Trinoma gave P150 million for the connection so they also have naming rights. We’ll get to that, we’ll discuss it later on.)

The DOT on Wednesday inked a memorandum of agreement with local conglomerates that would pave the way for the construction of the common station, which has been delayed by a legal tussle between the mall titans. The project, which is set to start this December and pegged to be completed in April 2019, will connect the MRT 3, LRT 1, and the soon-to-rise MRT 7 from Quezon City to San Jose Del Monte, Bulacan. It will rise on a property currently being used as parking lot for Trinoma, between Edsa and North Avenue. JE