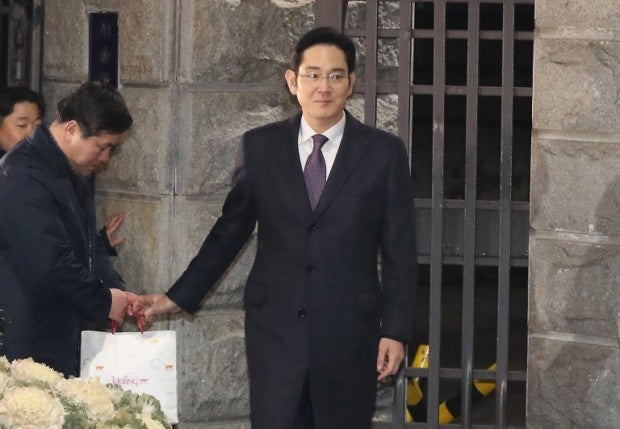 Samsung heir Lee Jae-Yong leaves a detention center after a court refused to issue an arrest warrant over his role in a corruption scandal engulfing President Park Geun-Hye, in Seoul early on January 19, 2017. Prosecutors’ demand for his arrest on charges of bribery, embezzlement and perjury this week sent shock waves through the Samsung group, the world’s biggest smartphone maker with revenues equivalent to a fifth of South Korea’s GDP. AFP

The Seoul Central District Court turned down a request by prosecutors on Monday for Lee’s arrest on charges of bribery, embezzlement and perjury.

The demand had sent shock waves through Samsung, the world’s biggest smartphone maker and a key part of the South Korean economy where Lee became the de facto head after his father suffered a heart attack in 2014.

But the rejection dealt a blow to prosecutors’ plan to question Park — impeached by parliament last month — on bribery charges no later than early February.

Lee, 48, was seen leaving a detention center where he had awaited the decision for the previous 18 hours.

With a slight smile, wearing a long coat and tie and carrying a shopping bag, he was led out by a security guard to a barrage of camera flashes, and was driven away without responding to questions from a horde of journalists.

Investigators said Lee gave or promised some 43 billion won ($36.3 million) worth of bribes to Choi, allegedly in return for the state pension fund’s backing of a merger of two Samsung affiliates — deemed crucial for Lee’s hereditary succession at Samsung.

But the prosecutors have so far failed to come up with solid evidence, the court said.

“It is difficult to accept the reasons, need and justification” to issue the warrant, it said in a statement released by the prosecutors, citing the lack of clear-cut evidence.

Samsung reportedly claimed Park, who has enormous executive power that could affect seriously the company’s future, had pressured it to make donations.

Samsung lawyers said the point of contention was whether the money changed hands in return for assistance from the government.

“The key point is whether any favours were given. We explained our position very clearly,” Lee’s attorney told reporters Wednesday after the court finished questioning Lee at a hearing.

Samsung is the single biggest contributor to the foundations and separately paid Choi millions of euros, allegedly to bankroll her daughter’s equestrian training in Germany.

Prosecutors have been probing whether Samsung’s payments were aimed at securing government approval for a controversial merger of two of its units in 2015.

The combination of Cheil Industries and Samsung C&T was seen as a key step towards ensuring a smooth third-generation power transfer to Lee.

It was opposed by many investors who said it wilfully undervalued Samsung C&T’s shares. But it was backed by the National Pension Service, a major Samsung shareholder.

Park, accused of colluding with Choi to extract money from the firms and letting her friend meddle in a wide range of state affairs, was impeached by parliament last month.

Both Park and Choi, who is on trial for coercion and abuse of power, have denied any wrongdoing as the Constitutional Court is reviewing the validity of the impeachment.

If the court upholds the impeachment, a presidential vote will be held in 60 days, with Park immediately losing executive privilege that protects her from criminal indictment. CBB/rga