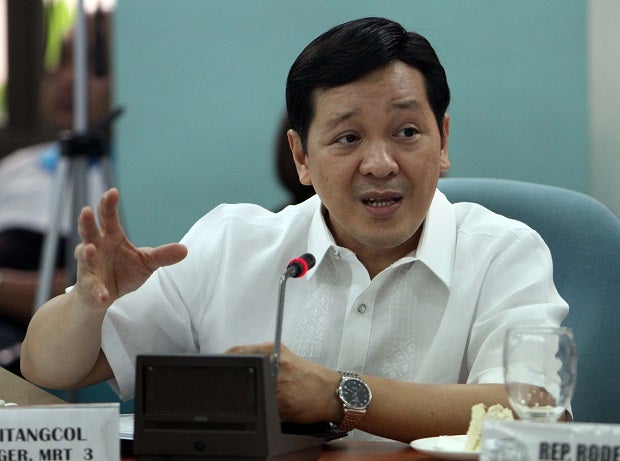 The Sandiganbayan has reset the arraignment of dismissed Metro Rail Transit (MRT-3) General Manager Al Vitangcol III on two counts of graft for an alleged extortion try on Czech firm Inekon in exchange for contracts with the railway system.

The Sandiganbayan Sixth Division on Thursday canceled Vitangcol’s scheduled arraignment and reset it to March 16.

The court has yet to rule on Vitangcol’s motion to quash his charges.

The court earlier ordered Vitangcol’s arrest after it found probable cause to try him. Vitangcol has posted bail.

READ: Arrest warrant out vs Vitangcol over $30M extort try

The court on Nov. 29 served the arrest warrant against Vitangcol and his alleged envoy Wilson De Vera.

Both were charged with two counts of graft or violations of Section 3(b) of the Anti-Graft and Corrupt Practices Act.

In indicting Vitangcol, the Ombudsman said his first graft charge stemmed from allegations that he attempted to extort $30 million from Inekon in exchange for contracts for the supply for additional light rail vehicles and maintenance of the MRT-3 in connection with the P3.7 billion MRT-3 expansion project in 2012.

Vitangcol and De Vera were accused of extorting money from Inekon Group CEO and chair Josef Husek at the residence of then Czech Ambassador to the Philippines Josef Rychtar. Inekon turned down the extort try.

After weighing in the testimonies of Rychtar and Husek, as well as the conflicting statements of Vitangcol and De Vera, Ombudsman Conchita Carpio Morales said the “totality of x x x circumstances, taken together with the affirmative declarations of complainant’s witnesses,” would show that Vitangcol attempted to extort from Inekon in exchange for the contract.

The Ombudsman also found Vitangcol guilty of the administrative offenses of grave misconduct, serious dishonesty and unlawful solicitation, and was ordered dismissed from service and perpetually barred from government with his retirement benefits forfeited.

Vitangcol decried selective justice, adding that the Ombudsman cleared former transportation secretary Emilio “Jun” Abaya even though it was the latter who approved the anomalous contract to PH Trams.

Vitangcol was sacked by the Department of Transportation and Communications in August 2014 after he was accused of conflict of interest when he awarded a contract to the firm of his wife’s uncle. IDL/rga