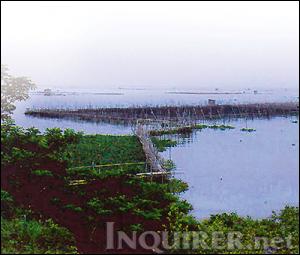 MANILA — The Department of Environment and Natural Resources (DENR) has assured fishermen that the upcoming clearing of aquaculture facilities on the Laguna Lake will not adversely affect the small-scale fisherfolk.

“We’ll take care of them. I made a commitment to the small fisherfolk. If we take out their source of income here, we’re going to replace it with another,” said DENR Secretary Gina Lopez in a press conference on Wednesday.

In a statement on Tuesday, the Pambansang Lakas ng Kilusang Mamamalakaya ng Pilipinas (Pamalakaya-Pilipinas) appealed for the exclusion of “baklad” or fish traps owned and operated by local small
fishermen from the government’s campaign to dismantle all fish pens and fish cages on the lake.

“We fear that even the ‘baklad’ owned by small fishers will not be spared from government’s campaign to dismantle wide fish pens in the lake. Those ‘baklad’ are the Laguna lake fishers’ alternative livelihood since open fishing is not that sustainable anymore courtesy of past administrations’ destructive projects that have degraded the lake,” said Pamalakaya chair Fernando Hicap, in a statement.

Pamalakaya pegged the small fisherfolks’ average fish catch on Laguna Lake as reaching only two to three kilos per day.

But DENR Undersecretary and National Anti-Environmental Crime Task Force (NAECTF) head Arturo Valdez said in the same press conference on Wednesday: “The ‘baklad’ [which take up little space], we’ll not touch that.” Valdez said the DENR “will work it out” with the small-scale fishers.

In a statement over the weekend, the DENR issued a “last call” for operators of fish pens and cages on Laguna Lake to demolish their own structures before the start of the agency’s clearing operations this
month. The DENR said they have been mapping out with the LLDA the schedule to conduct the clearing “by phases.”

The DENR statement said “all aquaculture facilities in the lake area will be covered by the dismantling operations”  since permits given to operators already expired last December 31, and the DENR has
implemented a moratorium on permit renewals or new permit applications this year.

DENR Undersecretary Maria Paz “Ipat” Luna confirmed to the Philippine Daily Inquirer that all fish pens and cages on Laguna Lake would be dismantled, but said that the operators would be allowed time to “harvest” cultured fish. Pamalakaya said operators were given until March to do so.

The moratorium and clearing operations are in line with President Duterte’s directive, during his State of the Nation Address, to dismantle corporate and private fishpens and fishcages to make way for
small-scale fisherfolk. Luna earlier explained the moratorium was to give the lake a “breather” and to make way for an “open fishing” scheme, as suggested by experts.

Pamalakaya urged the DENR to focus its clearing operations on the massive, corporate-owned fish pens and cages.  SFM/rga