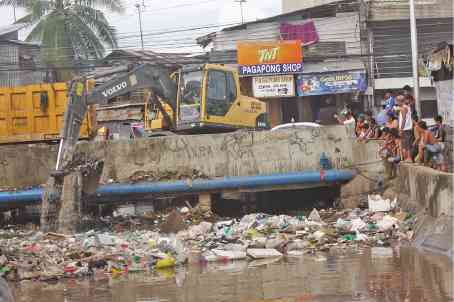 CAGAYAN DE ORO CITY—Kaycee Jane Verdadero and her classmates were at the Science Complex Building of University of Science and Technology of Southern Philippines (USTSP) on C.M. Recto here and were waiting for their teacher when it started raining at 3 p.m. on Monday.

“We were at the gym lobby but my classmates and I agreed to go to our classroom and wait for our class to start,” said Verdadero, 20, a communications management student.

A few minutes later, the rain became heavier. “We did not expect it (heavy rain). The water rose so suddenly,” Verdado said.

They decided to go to the third floor when they noticed that water was beginning to enter the building’s ground floor.

From there, they had a view of what was happening outside the building—rampaging floodwater inundating vehicles along its path.

Gerry Gorit Jr., 17, a Grade 11 student at USTSP, said it was not long before floodwater forced hundreds of students to seek refuge in the upper floors of school buildings.

By 4 p.m., floodwater rose to more than 3 feet in sections of the campus.

But as it was getting darker, it became apparent for them that the flood was not subsiding anytime soon.

Nef Luczon, an instructor at USTSP, said people were starting to get hungry.

The situation inside the school’s buildings got more tense by the minute when floodwater did not recede as night fell. Luczon said the water current by then was strong.

He said he started texting and calling authorities so they would become aware of the situation of hundreds of people now trapped at the school and nearby buildings.

But there was no help in sight as hours passed by.

What made things worse was that rescue vehicles couldn’t get to them as stranded vehicles blocked roads, said Maricel Casino-Rivera, city government spokesperson.

By 7 p.m., it became apparent that people would spend the night on campus. Gorit said their spirits had gone low; some of those stranded were shivering and hungry.

It was about midnight when rescuers arrived.

Luczon said he tried to feed as many people from whatever food he could find around but deeper sections of flooded areas prevented him from getting far.

The volume of Monday’s rain that triggered the massive flood was 20 millimeters less than the amount of rain that Tropical Storm “Sendong” dumped in the city in 2011.

Arthur Cupay of the Department of Public Works and Highways in Northern Mindanao said the rainfall volume on Monday was about 160 mm. A rain gauge installed near the Cagayan de Oro River read 166.2 mm.

While the volume of Monday’s rain was less than what Sendong dumped into the city, it topped the two-day total volume of rain during Typhoons “Agaton” and “Seniang,” both in 2014, according to Xavier University Engineering Resource Center.

Cupay said the flood was also worsened by clogged ditches. He said an elevated highway and bridge, built purposely to prevent flooding on C.M. Recto, failed.  —WITH REPORTS FROM ALLAN NAWAL AND RYAN ROSAURO