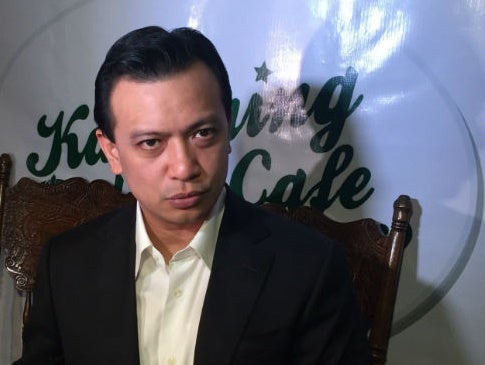 Senator Antonio Trillanes IV is asking the Senate to look into false news and social media ‘trolls’ that have proliferated online. INQUIRER FILE

Social media “trolls” are the targets of a Senate investigation being pushed by Senator Antonio Trillanes IV.

In Senate Resolution No. 259, Trillanes wants the Senate committee on public information and mass media and other appropriate committees to probe the “proliferation of false, erroneous, distorted, fabricated and/or misleading news and information on social media, as well as on the so called social media trolls.”

The probe aims to protect the public from “manipulation” through the spread of “false, erroneous, distorted, fabricated and/or misleading news and information,” said the resolution.

It also seeks to hold “the authors, distributors and/or purveyors of the same responsible and/or accountable under the law for the contents they generate and/or disseminate.”

“Recently, instead of being a tool for empowerment, the social media has become a platform for political propaganda, deceit and manipulation, which has been continually abused and misused for the sake of personal or political agenda, at the expense of rational discourse and discussion with the proliferation of the so called “social media trolls,” Trillanes said in the resolution.

He described a social media troll as someone whose identity is usually anonymous and who “deliberately creates and/or foments discord and conflict on social media sites” through the posting of controversial and inflammatory messages that provoke emotional responses from other internet users.

“Because of social media trolls, the social media is now being used to create fabricated realities through a network of fake social media accounts intended for trolling and spreading of erroneous and misleading news and information,” the resolution said.

According to Trillanes, social media trolls were creating a “culture of impunity online” by using foul and uncensored language, and personal attacks like death threats and rape threats.

He said social media trolling was also becoming a source of living where one can allegedly earn up to $2,000 a month for creating fake accounts and using them to manipulate social media content and discourse.

These social media trolls, he said, are responsible for creating and spreading false and misleading news and information to build a sense of popularity or dissent for a particular person, idea or causes with no existing and viable system to hold them accountable for their actions.

“The spread of false, erroneous, distorted, fabricated and/or misleading news and information by these social media trolls threatens the viability and credibility of online journalism, with internet users having few mechanisms to filter news sources,” the senator said in the resolution.

Trillanes said there was an “immediate and imperative need” for the Senate to investigate the matter as it was not only threatening the “viability and credibility” of online journalism but it was also violating every citizen’s right to truthful and accurate online news and information. CBB