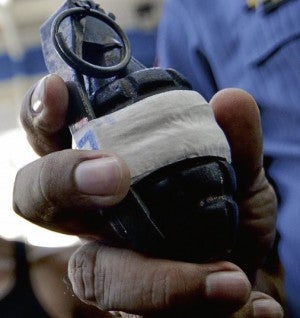 SAN PEDRO CITY, Laguna — One person was killed while five others were wounded in an explosion early Monday in a 45.5-ha prime lot in this city.

San Pedro City police chief Supt. Harold Depositar said a male laborer, whose identity was still being verified by the police, was killed, while five other workers were wounded in the explosion apparently caused by a hand grenade at 9 a.m. in the property in Barangay San Antonio. This property is the subject of a dispute between title holder Carlos Newman Young and Oliverio Laperal Sr.

Young and Laperal were claiming the vast tract of prime land located just a few hundred meters from the high-end Vista properties in Alabang, Muntinlupa City.

Since January 5, the San Pedro police have reported a series of gun shots and minor explosions.  The two parties in the land dispute accused each other of being responsible for the gunfire and explosions

On Monday, Depositar said a group of laborers hired by the Laperals were working on a concrete fence when a hand grenade was hurled at them.

Nelson Beloso, a representative of the Young family, said they had enclosed the property in December using barbed wire and signage warning trespassers. The Youngs had also hired security guards to man the property.

Beloso said in an interview last week that Young was an American war veteran who owned the property as part of the 3,200 “hacienda” spanning parts of Biñan City, the town and cities of Carmona, Bacoor and Imus in Cavite, and the cities of Muntinlupa and Las Piñas in Metro Manila.  SFM/rga