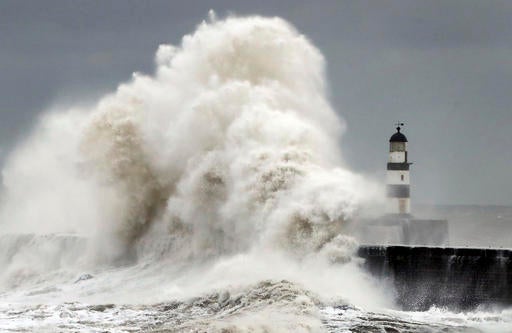 Waves crash into the sea wall at Seaham northeast England Friday Jan. 13, 2017. The North of England was covered in a blanket of snow while the east coast was braced for a storm surge that could cause flooding. (Owen Humphreys/PA via AP)

LONDON—A powerful winter storm battered Europe on Friday, knocking power out for 330,000 homes in France, prompting the evacuation of thousands of seaside dwellers in Britain and disrupting travel.

Britain issued more than a dozen severe flood warnings, meaning there was a risk of danger to life, and deployed the military to help thousands of people to evacuate their homes in several seaside communities.

Since the end of last week, a winter cold snap across Europe has killed more than 60 people, with homeless people and migrants stranded in countries like Greece and Serbia most at risk.

In France, a woman was killed by a falling tree in her garden in a village near the Mediterranean resort of Nice, while another woman in Albania was found dead on Thursday outside her home in the southern town of Saranda.

“She died in front of her children. Her husband immediately tried to help by cutting the tree but it was too late,” a French police official said of the death there.

At one point overnight, 330,000 homes were without power in France, although this was reduced to 35,000 by Friday night.

Eurostar cancelled two trains between London and Paris, while 180 passengers were forced to spend a chilly night on a high-speed Thalys train from Brussels to the French capital that finally arrived 10 hours late.

“At first we had electricity, but then it cut. We found ourselves in the dark without heating,” said Eduardo Soteras, a photographer who was on the train.

‘Hardship for homeless and refugees’

Winds of up to 146 kilometres (90 miles) an hour hit France’s Channel port of Dieppe overnight, while parts of Germany were bracing for up to 30 centimetres (12 inches) of snow, according to German weather officials.

The rose window of a famous Gothic cathedral in Soissons in northern France was also badly damaged.

“Severe winter weather struck southeastern Europe, with extreme cold and snow in Italy, the Balkans and Turkey. This caused many accidents on roads, school closures, cancelled flights and hardship for the homeless and refugees,” the UN weather agency said.

The World Meteorological Organization said in a statement that the high-pressure weather system was moving slowly eastwards over Europe.

In Ukraine, officials said sub-zero temperatures across the country have claimed 40 lives since late December.

Flood warnings were put in place for much of England’s east coast, while in the Netherlands pumps were used to lower water levels in Amsterdam and surrounding areas, according to Dutch news agency ANP.

Thousands of residents in Skegness and Great Yarmouth, both in eastern England, were urged to leave their homes or move to upper floors, while further south, villagers in Jaywick were also warned to evacuate ahead of high tide. 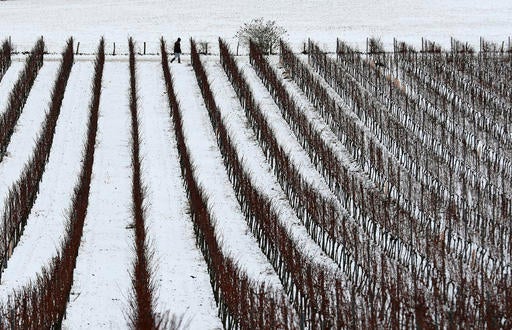 A man walks past a snow covered vineyard near Maidstone, southeast England, Friday Jan. 13, 2017. London and the southeast of England were hit by a snow storm Thursday evening and more snow was forecast for Friday (Gareth Fuller/PA via AP)

Around 200 troops were deployed to Great Yarmouth to help evacuate more than 5,000 homes, while 100 soldiers were standing by in Skegness to help out.

Temporary shelters were set up for local residents, but some appeared reluctant to leave — even in Jaywick, where 35 people died in floods in 1953.

“While I know the police are putting on extra patrols, they can’t cover the whole area the whole time.”

“That is why we have soldiers on the ground helping to warn and evacuate people alongside the emergency services and environment agency teams, who are putting up temporary defenses.”