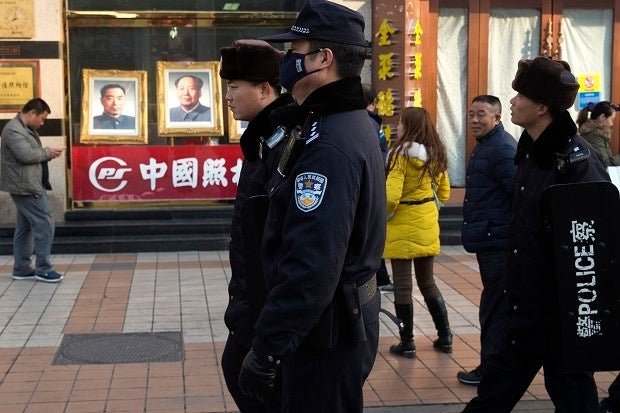 In this Thursday, Jan. 12, 2017 photo, a Chinese police officer and security personnel bearing shields walk past a portrait of late Chinese leader Mao Zedong displayed at a photo printing shop in Beijing, China. Across China, a retrograde strain of populist nationalism is gaining strength as the ruling Communist Party intensifies its control over history and ideology. Those who question the party’s interpretations find their careers and reputations threatened, while their persecutors receive tacit and sometimes outright support from the authorities. AP FILE PHOTO

BEIJING — Writer Lu Yong had merely wanted to show support for a professor who had taken flak online for criticizing Mao Zedong, the founder of the communist state who died more than four decades ago.

Yet minutes after raising a sign to defend Deng Xiangchao’s right to free speech, Lu found himself surrounded by a group of Mao supporters who grappled at his face. Other companions were punched and kicked.

Video taken hours later showed the Mao loyalists parading through the campus of eastern China’s Jinan University with large banners while chanting “Down with Deng Xiangchao, down with traitors.” Within days, Deng was forced to retire and stripped of his Communist Party titles. State media justified his dismissal.

Across China, a retrograde strain of populist nationalism is gaining strength as the ruling Communist Party intensifies its control over history and ideology. Those who question the party’s interpretations find their careers and reputations threatened, while their persecutors receive tacit and sometimes outright support from the authorities.

“They are shutting down speech that’s not aligned with the party,” said Feng Chongyi, a China scholar at Sydney’s University of Technology. “Populism and the manipulation of working class anger, combined with nationalism and xenophobia are the classic signs of Chinese totalitarianism.”

The Chinese president and party leader, Xi Jinping, is largely seen as setting the tone for the newly conformist attitude.

The son of a Mao confederate steeped in party lore, Xi set the tone shortly after taking power in 2012, with a major speech in which he said that the latter 30 years of Communist Party rule — a period of economic and political reform — should not be considered a repudiation of the first 30 years under Mao.

More recently, authorities have warned against liberal Western values in the classroom, rounded up lawyers and civil society activists — along with corrupt officials — and promoted a cult of personality around Xi likened to that surrounding Mao.

Earlier this week, the Education Ministry ordered that textbooks move the start of China’s war against Japanese invaders six years back to 1931, calling it a “14-year” war, apparently to broaden the scope of the struggle from which the party derives its legitimacy. Last year, a Beijing court found a writer guilty of libel after he challenged the veracity of a famous tale of Communist Party soldiers sacrificing themselves against the Japanese. Liberal editors of a respected history journal were ousted last year.

Deng initially attracted critics’ ire in December when he mused online that millions of Chinese lives would have been saved had Mao died decades earlier — a view not unusual among intellectual circles. Mao’s policies have been blamed for tens of millions of deaths through famine and political upheaval.

Mao supporters, largely retired workers and military veterans, increasingly gather to praise the former leader in public. Online, Maoist communities lambast public intellectuals or party members who criticize Mao — even in jest — with the apparent assent of the authorities.

Song Yongyi, a Cultural Revolution historian based in California, said he was concerned about a “revived use of mass movements to suppress discourse and spread fear.”

“These are the same tactics of using Red Guards to defend the government,” Song said.

Maoist blogger Lu Qi said pro-Mao actions have skyrocketed due to growing inequality and working-class frustration with capitalism. He praised Deng’s ouster as democracy in action.

“Deng Xiangchao’s speech clearly violated political correctness,” Lu said. “I believe everyone should bear responsibility for their own illegal speech.”

“This is probably the first time in 20 or 30 years that anti-riot police or armed police were not deployed against leftist protests and demonstrations,” Zhang wrote. “This is a sign that we’ve reached a turning point.”

Utopia, an online gathering place for Maoists and hard liners, this week celebrated the recent ousting of public figures for “anti-Mao, anti-Xi, anti-party” speech, among them Bi Fujian, a prominent TV host suspended by China Central Television after a video surfaced of him mocking Mao at a private event.

Following Deng’s removal, online Maoists quickly moved on in search of other targets. Spotting social media posts from a television producer in support of Deng, they complained and he was swiftly suspended from his job.

In Jinan, which suffered some of the worst convulsions of the Cultural Revolution, the Maoist community is making its presence felt. Supporters gather in public parks to spread Mao’s teachings and denounce corruption — sometimes attacking critics like Lu, the writer who sought to defend the professor.

“Even if Deng said something wrong, he should be held accountable according to the law, not be attacked this way, like during the Cultural Revolution,” Lu said. “As a writer, I cannot watch the basic freedom of speech disappear.”