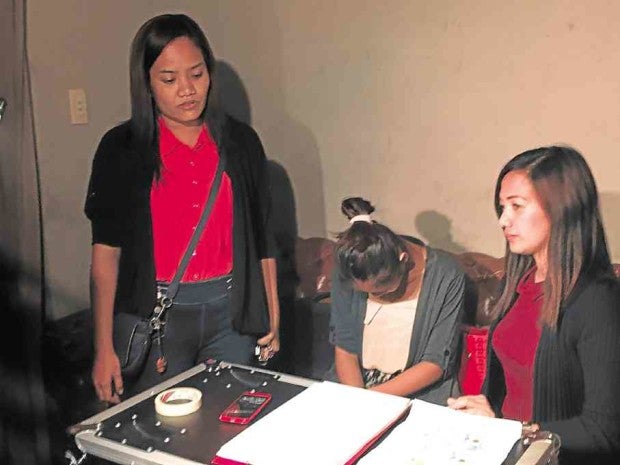 The drug-peddling suspect (center) is presented on Friday by her “buyers” SPO1 Marivel Morte (standing) and PO1 Freda Bumasao of the Taguig police.

A 20-year-old woman was arrested by Taguig City policewomen in a buy-bust operation at a high-end bar in Bonifacio Global City on Thursday night.

After an exchange of text messages with undercover agents, Argeline Ingram allegedly agreed to sell them P2,500 worth of ecstasy tablets and marijuana.

When the poseur buyers, SPO1 Marivel Morte and PO1 Freda Bumasao, met Ingram for the transaction inside the bar, the suspect could only produce a pack of dried marijuana leaves worth P500 and explained that her source had run out of party drugs.

Ingram, a sales clerk residing in Sampaloc, Manila, was detained at the Taguig police station to face charges for violation of the Comprehensive Dangerous Drugs Act.

Chief Insp. Jerry Amindalan, Taguig antidrugs unit head, declined to make public the name of the bar where Ingram was arrested, citing an earlier agreement between the police and the BGC-based bars, which enlisted the latter’s cooperation in the war against drugs.

One of the terms was the “nondisclosure” of the name of the establishment where the police operation was conducted, Amindalan said.

Another partygoer at the same bar was arrested for selling an ecstasy tablet in December, the officer said.

In August, bar owners in Taguig and neighboring Makati City signed a memorandum of understanding allowing antidrug policemen in plainclothes to enter their establishments to conduct surveillance operations on their customers.

Taguig Mayor Lani Cayetano then warned that any establishment used as a venue for illegal drug activities will be automatically shut down.