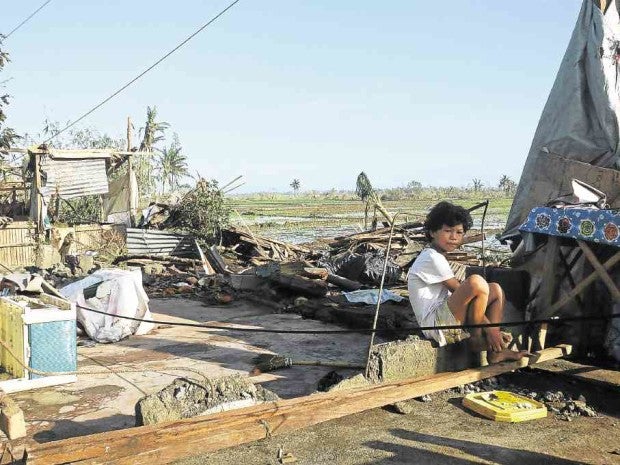 A girl rests near the ruins of her family’s house in Tiwi, Albay, after Typhoon “Nina” hit the Bicol region. —GEORGE GIO BRONDIAL

“Fortunately, the typhoon came after farmers harvested rice, so most of the damage [refer to] rice lands in vegetative growth. Many farmers are still setting up their seed beds,” she said.

“When the President visited Bicol on Dec. 28, he initially pledged P50 million. But when he saw the extent of damage, he added another P50 million for Camarines Sur alone,” she said.

De los Santos said the typhoon’s impact on agriculture would be felt in the first three months of 2017, largely due to the delayed harvest.

“In replanting, farmers cannot recover 100 percent so the expected harvest in the early part of 2017 would slide down,” she added.

De los Santos said to make up for the impact of the typhoon on rice production, the DA would increase areas that would be planted with hybrid and certified seeds, hoping these would lead to better harvests during the summer months.

De los Santos said Agriculture Secretary Emmanuel Piñol, after seeing the extent of damage in the Bicol region, announced the government’s commitment of P500 million for the rehabilitation of agriculture areas in Bicol damaged by the typhoon.

She said the DA could determine the duration of the rehabilitation after  a postdisaster needs assessment (PDNA) in  Catanduanes,  Albay and  Camarines Sur.

De los Santos said the PDNA started on Jan. 10 and would be completed by Feb. 3, when the teams are expected to submit the rehabilitation plan.