‘Brrr’ back in Baguio as mercury drops | Inquirer News

‘Brrr’ back in Baguio as mercury drops 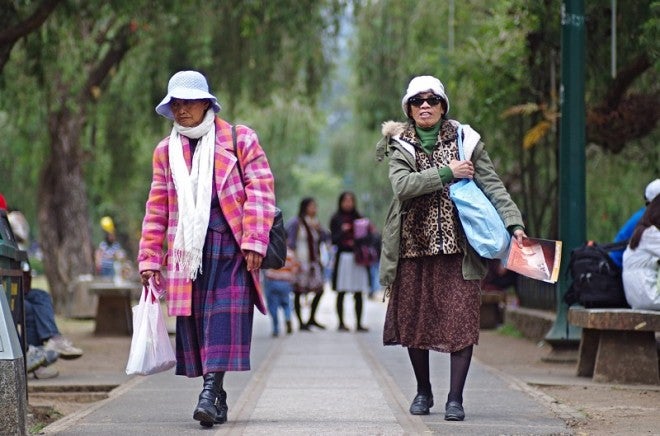 The mercury dropped to 11 degrees at 5 a.m. on Monday, breaking the warm spell that this mountain city had been experiencing since last year.

The coldest temperature recorded by the Philippine Atmospheric, Geophysical and Astronomical Services Administration (Pagasa) here last year was 13 degrees Celsius on Dec. 24. In 2015, the coldest was 10.4 degrees Celsius.

Weather specialist, Danny Galati, said the chilly morning was the result of a surge of the northeast monsoon, which brought the winter air from the northern hemisphere.

From December 2016 to Jan. 6, the temperature reading had been between 13 and 14 degrees Celsius, Galati said, adding that last year was one of the hottest in the last decade.

Residents of Baguio and nearby La Trinidad town in Benguet province, who are used to the nippy weather, ditched their jackets even when the temperature dropped to between 13.2 and 11.5 degrees last week.

The sudden temperature drop on Monday surprised Anna Leah Abarra, 37, who commutes early from La Trinidad to Baguio to report for work at 8 a.m.

“The cold dug deep into my bones. This was not the cold we were experiencing in the past few days,” she said.

A 60-year-old woman said she walked around Burnham Park in the downtown area in the morning and felt the sudden chill. —GOBLETH MOULIC