Monk critical after setting himself on fire over sex slavery 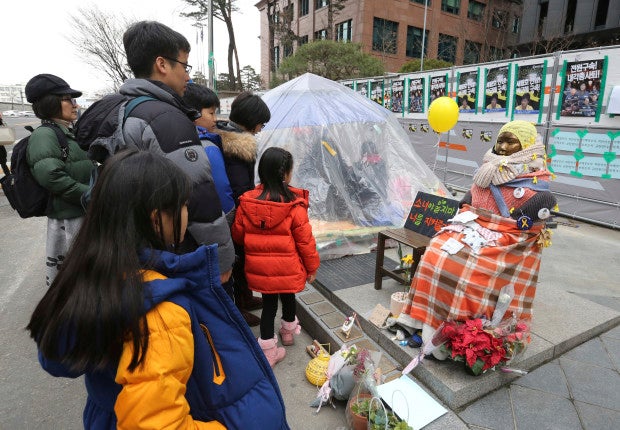 People watch a statue symbolizing women forced into wartime Japanese military brothels in front of the Japanese Embassy in Seoul, South Korea, Sunday, Jan. 8, 2017. A South Korean Buddhist monk is in critical condition after setting himself on fire to protest the country’s settlement with Japan on compensation for wartime sex slaves, officials said Sunday. AP

SEOUL, South Korea — A South Korean Buddhist monk is in critical condition after setting himself on fire to protest the country’s settlement with Japan on compensation for wartime sex slaves, officials said Sunday.

The 64-year-old monk suffered third-degree burns across his body and serious damage to vital organs. He’s unconscious and unable to breathe on his own, said an official from the Seoul National University Hospital, who didn’t want to be named citing office rules.

The man set himself ablaze late Saturday during a large rally in Seoul calling for the ouster of impeached President Park Geun-hye, police said. In his notebook, the man called Park a “traitor” over her government’s 2015 agreement with Japan that sought to settle a long-standing row over South Korean women who were forced into sexual slavery by Japan’s World War II military, police said.

Under the agreement, Japan pledged to fund a Seoul-based foundation that was set up to help support the victims. South Korea, in exchange, vowed to refrain from criticizing Japan over the issue and try to resolve the Japanese grievance over a bronze statue representing wartime sex slaves in front of its embassy in Seoul.

The agreement has so far come short of bringing a closure to the emotional issue. The deal continues to be criticized in South Korea because it was reached without approval from victims, and students have been holding sit-in protests next to the Seoul statue for more than a year over fears that the government might try to remove it.

Japan announced Friday it would recall its ambassador to South Korea and suspend economic talks in response to the placing of a “comfort woman” statue representing wartime sex slaves in front of its consulate in the Korean port city of Busan. A similar statue had been previously placed in front of Japan’s embassy in Seoul.

On Sunday, Japan’s foreign minister called on South Korea to fully implement its part of the 2015 settlement.  Fumio Kishida said during a visit to Prague that his country is “sorry” about the new statute, adding Japan implemented its part of the deal.

On Friday, the Japanese government reacted angrily to the placing of the statue in Busan, announcing a recall of its ambassador to South Korea and suspension of economic talks.

“It has been mutually confirmed that this is a final and irreversible agreement. Japan has sincerely fulfilled its obligation,” Abe said on a NHK news talk show aired Sunday. He said that Japan had already paid 1 billion yen ($8.5 million) in compensation.

“Next, I think South Korea must firmly show its sincerity,” he said, adding that the agreement should be implemented regardless of leadership change as a “matter of credibility.”

At the time of the deal, Seoul said there were 46 surviving South Korean victims. CBB

Read Next
Storm ‘Auring’ moving closer to Bohol
EDITORS' PICK
SMDC’s Bloom Residences: A master planned community that cares for your health and wellness
COVID-19 cases in PH pass 3.2 million mark with 37,154 new cases — DOH
Over 3 Million worth of prizes to be won at Smart Padala’s SENDali Manalo Promo!
Upsilon, Unilever give ‘real talk’ on climate change crisis
What to expect as Metro Manila starts ‘no vaccination, no ride’ policy on Monday
Metro Manila’s daily COVID-19 growth rate drops to 2% — Octa Research
MOST READ
IATF protocols now apply to travelers who arrived on or before Jan. 13
‘Not my loss’: Did Kris Aquino just comment on her breakup with Mel Sarmiento?
Thailand records first Omicron death
Tito, Vic and Joey still not quitting, breaking trends as they celebrate 50th year in the biz
Don't miss out on the latest news and information.