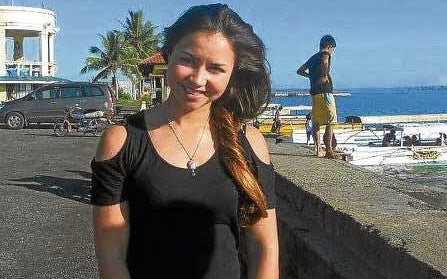 HUNDRED ISLANDS VISITOR Before she was chosen Miss New Zealand, Tania Dawson stayed in her mother’s hometown in Santa Maria, Pangasinan province, in 2012. A photo taken that year shows her at the takeoff point to the Hundred Islands National Park in Alaminos City during a family outing. —CONTRIBUTED PHOTO

SANTA MARIA, PANGASINAN—If she had her way, Miss New Zealand Tania Pauline Dawson, who is joining this year’s Miss Universe beauty pageant in Manila, would visit this eastern Pangasinan town next week.

She had e-mailed the municipal tourism officer, Doris Ramos, that she wanted to visit a public school here and pay a courtesy call on Mayor Teddy Ramos and later, on Gov. Amado Espino III at the capitol in Lingayen town.

But her plan would not push through. The director of Miss Universe Organization (MUO) handling the pageant thumbed down the proposed visit on Jan. 10-12.

“[MUO] gave us certain requirements that were impossible for us to comply with,” Doris Ramos said. “But we have prepared everything, including Tania’s itinerary and welcome tarpaulins.”

Tania’s excitement to visit this town was understandable. Her mother, Margarita Garcia Palabay, was born and spent early schooling at a public school in Barangay San Vicente in Santa Maria.

Palabay attended high school and college and had worked in Baguio City where she met her husband. In the 1980s, her husband took her to New Zealand where they raised a family of three boys and Tania, the youngest.

In 2012, Tania, her mother and three brothers visited this town and stayed at their grandparents’ ancestral house. Her grandfather, Cesar Palabay, stays in Santa Maria while her grandmother, Pauline, lives in New Zealand.

“Tania was fun to be with. We did not talk much because I had to speak in English and it was hard,” said a cousin, Cyle Palabay, 19.

Tania was polite, kissing the hands of all elder relatives whom she met, said Levy Garcia, a cousin of Tania’s grandfather. “She promised to practice speaking Filipino when she returns,” Garcia added.

They call her Marimar

Tania would also eat Filipino food, including boiled camote (sweet potato) tops. “We gave her ‘santol,’ ‘mabolo,’ ‘siniguwelas’ and other fruits we could find at that time and she liked them,” Garcia said.

He said Tania would walk in her shorts from her grandparents’ house to the town center about a kilometer away and rode back home in a pedicab.

“The people here called her ‘Marimar’ because she looked like [the Mexican telenovela character],” he said.

While in the country at that time, Tania and her family also visited the Hundred Islands National Park in Alaminos City and Boracay in Aklan province.

Tony Escorpezo, another grandfather, said he once told Tania that she would one day be a beauty queen. “But she just smiled. And who would have imagined that what I said would come true,” Escorpezo said.

Despite the canceled visit, residents are rooting for Tania, Ramos said. “We are very proud of her and I think every Pangasinense should also feel the same.”