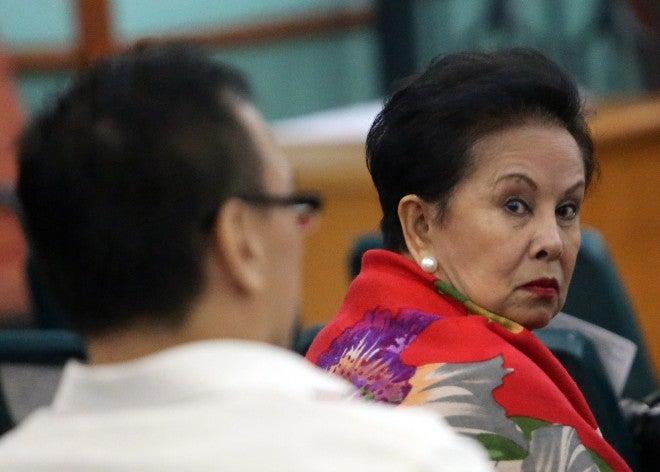 State prosecutors have appealed the Sandiganbayan’s denial of the bid to drop the graft charge versus former Makati City councilor Ernesto Aspillaga to turn him into a state witness against former Makati Mayor Elenita Binay.

The prosecution argued that “at the end of the day, vital testimony will be suppressed” if it did not allow Aspillaga to testify against Binay for the alleged anomalies in the procurement of P72.06-million worth of furniture for the city hall in 1999.

In a nine-page motion for reconsideration, the Ombudsman’s Office of the Special Prosecutor disagreed with the Special Fifth Division’s pronouncement that it pursued the wrong method of discharging Aspillaga.

The court had voted 3-2 to grant Binay’s bid to block the discharge of Aspillaga, stating that the prosecution should not have sought the remedy under Section 17, Rule 119 of the Revised Rules of Criminal Procedure (RRCP).

It said that since Aspillaga was already admitted by the Department of Justice to the witness protection program (WPP), the proper way for the prosecution would be to amend the charge sheet under Sec. 14, Rule 110 of the RRCP.

Prosecutors, however, said the court “made a serious error” and insisted that the Rule 119 mode was the one applicable in Aspillaga’s case.

The appeal stated that the “substantial amendment” of the charge sheet under the Rule 110 mode can only be made before arraignment.

Dropping an accused in such a way that it affects the others’ defense was deemed a “substantial amendment.”

It was only during the Sept. 25, 2014 hearing by the Senate blue ribbon committee that he accused the Binay family of rigging the procurement of the city’s contracts.

Prosecutors said if they abandoned the discharge under Rule 119 and pursued an amendment under Rule 110, “in all likelihood, the amendment will be denied by the court.”

Prosecutors added the court’s resolution would also thwart the intention of the Witness Protection, Security and Benefits Act that mandates the discharge of persons admitted to the WPP so they can testify as state witness.

Vital to the case

Prosecutors considered Aspillaga’s testimony to be vital to the case because of his first-hand knowledge of the alleged anomalous transaction as former head of the city’s general services department.

Aspillaga told the Senate blue ribbon subcommittee that almost all the public biddings conducted by the city during the Binay family’s longtime reign were rigged.

He described the procurement of various contracts over the years as “moro-moro” (just for show) or “bidding-biddingan” (pretend bidding).

The assailed Dec. 9 court resolution was reached via split vote.

Justices Roland B. Jurado penned the resolution with the concurrence of Justices Samuel R. Martires and Geraldine Faith A. Econg.