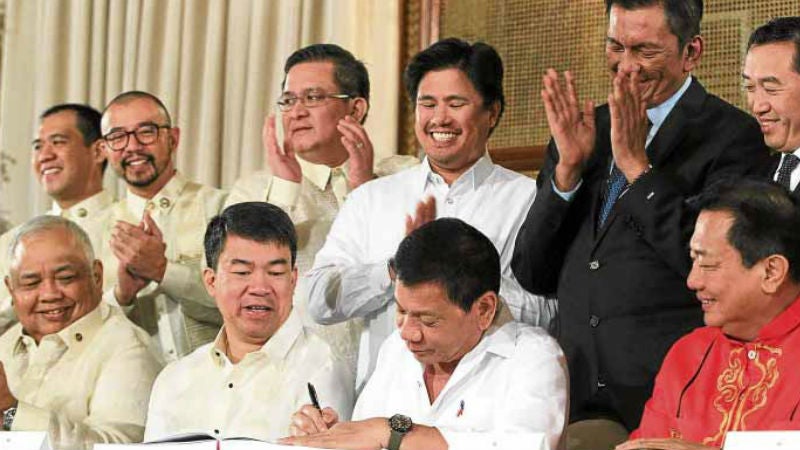 THANK YOU, BOSS Senators and congressmen applaud as President Duterte signs the General Appropriations Act for 2017 in this photo taken on Dec. 22, 2016. Sen. Panfilo Lacson has insisted that pork funds have been inserted into the national budget. —MALACAÑANG PHOTO

“To put a veil on their postenactment participation, in connivance with those in the executive branch, the legislators now identify their projects prior to submission of the budget to Congress, during the budget deliberations and even during the bicameral conference,” Lacson said in an interview with the Inquirer.

“These are being done without official records or communication,” Lacson said.

“Pork barrel has been a very corrupt and corrupting system in our political institutions, which had been shortchanging millions of Filipinos who suffer from half-baked, even ghost projects,” he said.

“Under the pork barrel system, the government perpetuates corruption which effectively diverts the resources of government and denies the people the basic services they need. Hence, while pork barrel was called the Priority Development Assistance Fund (PDAF), there is no development, especially in the far-flung communities of the country,” Lacson said.

It would take a “lot of political will” on the part of President Duterte to do away with pork barrel, Lacson said, just as it would take “honest and trustworthy technical advisers who would inform the President of the presence of pork.”

Budget Secretary Benjamin E. Diokno has maintained that there is no pork in the 2017 General Appropriations Act (GAA).

Diokno said last month that funds Lacson referred to did not qualify as pork as defined by the Supreme Court in a landmark decision in November 2013.

The high tribunal, acting amid widespread public indignation over the alleged diversion of P10 billion in PDAF allocations to ghost projects, voted 14-0-1 to declare the system as unconstitutional and called for the prosecution of individuals who benefited from the scheme over the past two decades.

“The pork concept mentioned by the Supreme Court referred to participation by congressmen and senators during implementation,” Diokno said.

There is nothing wrong, he averred, to funding of pet projects recommended by lawmakers during the budget preparation.

A member of the House of Representatives gets an annual allocation of P80 million under the PDAF; a senator gets P200 million.

Lawmakers closer to the Duterte administration “naturally get more” funding for pet projects, Lacson said, “in fact, much, much more.”

Lacson provided a copy of “pro forma files,” standard documents on which congressmen list down their projects and submit them to the Department of Budget and Management for inclusion in the National Expenditure Program (NEP) prepared by the Palace.

Lacson said congressmen had “unimaginatively indicated in their project their ‘legislative district’ instead of ‘engineering districts’ of the Department of Public Works and Highways (DPWH) to ensure that their quota allocations in the 2017 budget would go to their bailiwicks and pet projects.”

He said a neophyte congressman had given him a copy of the document from the House leadership to list down pet projects. He did not identify the lawmaker, who he said was angered by the “counterproductive effects of pork and patronage politics.”

Lacson, along with the late Sen. Joker Arroyo, has refused to participate in the pork barrel system.

He earlier claimed favored congressmen received pork allocations from P1.5 billion to P3 billion while some senators, up to P300 million.

Nograles said the GAA had specific line item projects and that different agencies and departments identified the projects and evaluated them before the NEP was finalized.

He denied the existence of the so-called pro forma files.

But Lacson said on Sunday the reason Diokno and even former Budget Secretary Florencio Abad deny there was pork in the budget was because since the 2013 ruling, there were no more lump-sum appropriations that legislators could still identify projects under their entitlements.

After 2013, Lacson said congressmen submitted a list of projects even before the Palace presented the NEP to Congress, or before the period of amendments of the budget measure.

“That’s the creative way of going around the Supreme Court ruling because there is no postenactment identification of projects,” Lacson said.

He called the practice “anomalous” because “the legislature is already participating in the budget preparation which should be the domain of the executive branch not to mention, obvious conflict of interest.”

“How can they introduce amendments when they are too focused in guarding their own list?” he said.

Lacson earlier said pork insertions were normally “parked” on government agencies. He insisted that there were “telltale signs of pork” in the 2017 budget.

He said that when his team was scrutinizing the DPWH budget, they discovered 100 items each worth P25 million without specific descriptions.

When he questioned this, he was told this was “augmentation.” The P25-million deals later disappeared but were replaced by P10 million each of the same items. —WITH REPORTS FROM BEN O. DE VERA AND NIKKO DIZON