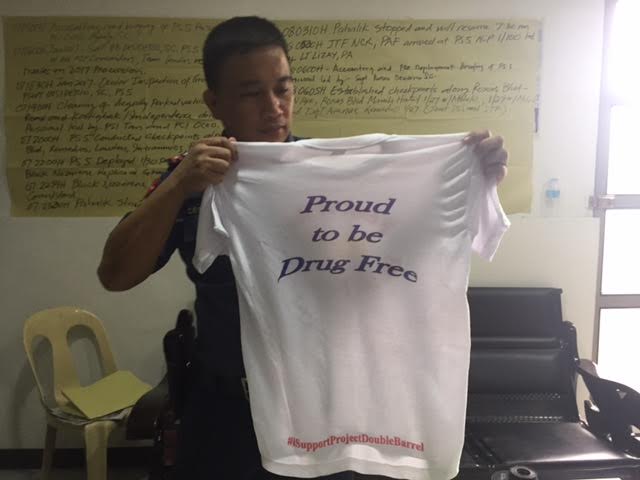 A police officer of the Manila Police District’s Ermita station shows off the white t-shirt to be worn by rehabilitated drug users during the Black Nazarene procession on Jan. 9, 2017. (PHOTO BY AIE BALAGTAS SEE / INQUIRER)

MANILA — Former drug addicts who surrendered under the police’s Oplan Tokhang will join the Black Nazarene procession on Monday (Jan. 9) in hopes to usher two kinds of changes: the public perception on drug addicts and the perception on how policemen handle surrenderers.

“We want to show drug users that they can change if they want to change,” the Ermita police station chief, Supt. Romeo Desiderio told the Philippine Daily Inquirer on Sunday.

“We also want to change the public perception that you will die when you surrender to the government’s Oplan Tokhang. That’s not true and this is our proof,” he added.  Oplan Tokhang is the PNP’s door-to-door campaign to persuade known drug users in communities to submit to rehabilitation.

About 100 surrenderers who have been under Ermita police station’s care will don white shirts and join millions of mostly barefoot devotees tread the procession route.

Among the words printed on these shirts were: “Proud to be drug free” and “ISuportProjectDoubleBarrel.”

Desiderio said Manila policemen thought of this project in order “to uplift” the former drug suspects and at the same time show them that “there is hope.”

Oplan Tokhang or “knock and plead” is the Philippine National Police’s way of compelling suspected drug users and pushers to “surrender” so they can have a chance to reform and live normal lives again.

However, critics and relatives of victims noted that after surrendering, many of the drug suspects would later die—either at the hands of the police or unidentified gunmen.

“We want to help these people change. We treat them as humans. It does not mean you’ll die once you become a surrenderer. That’s just an exaggeration,” he said.

Also on Sunday, thousands of devotees flocked to Quirino Grandstand for the traditional Pahalik.

“They pray, touch the Nazarene, then take selfies. This routine takes about 15 seconds. So organizers prohibit people from taking selfies because it causes delay,” Desiderio said.

People began trooping to the site on Saturday night. As of 3 p.m. on Sunday, the crowd estimate was 27,000.

“That’s a generous estimate,” Desiderio said, adding there were less attendees this year compared to 2016.

One of them was Ernesto Ferrera, 55. He joined the traditional Pahalik not to ask for grace but to thank the purported miraculous image for the blessings he and his family have received for the past 20 years.

The father of four was misty eyed as he recalled how, two decades ago, he would join the tradition to ask God for help.

Ferrera was penniless and had nowhere to run to when he discovered the basilica in Quiapo.

“I was broke and lived far from my parents. At that time, my eldest had just been born and I just lost my job. My wife and I didn’t know where to get money to raise her. That’s when I turned to God through the Nazarene. That’s how I discovered this faith,” Ferrera said.

His wishes, he said, were granted. Twenty years later, his children were able to finish school, he was able to put up his own business, and he was able to buy his own house.

Since then, Ferrera never stopped adoring the Nazarene. And although Ferrera has never joined the January 9 procession, he, his family would yearly endure long lines just to kiss and touch the Nazarene for the Pahalik.

“It’s faith. No matter what people tell me, I will never stop adoring the Nazarene,” he said.

“But I stopped asking God for favors. Now, I am here to give Him thanks because there’s nothing to ask for anymore. He already gave me everything and I am grateful,” he said.

The Pahalik started 7:30 a.m. Last year, it started a day earlier on January 7.

Most of the attendees were female adults. Desiderio also noted that teenage devotees were less this year.

Desiderio said the number could still climb higher as they expected the crowd to pour in at 6 p.m.

Stricter security measures were in place.

Aside from checkpoints and jammers, authorities also deployed two CBRNE vehicles that would respond in case of chemical, biological, radiological and nuclear hazard.  SFM