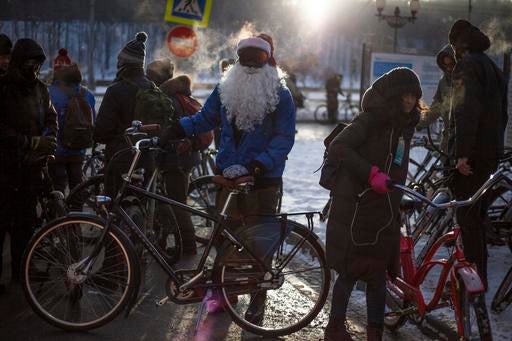 Participants of the second winter bike marathon in support of cycling infrastructure in the city, one of them wearing a Ded Moroz (Santa Claus, or Father Frost) costume, prepare to ride along the embankment of the frozen Moskva River and the Kremlin Wall in Moscow, Russia, Sunday, Jan. 8, 2017. Temperatures dipped in Moscow -28 C ( -18 F) . (AP Photo/Alexander Zemlianichenko Jr)

MOSCOW  — For hundreds of Muscovites, the fact that the temperature had plunged to minus-27 Celsius (minus-17 F) was no reason to avoid going for a group bicycle ride.

About 500 cyclists, many equipped with fur hats and other nonstandard gear, held a ride of about eight kilometers (five miles) along the Moscow River on Sunday as the capital shivered through a fierce cold snap. Sunday was the last of Russia’s winter holiday period that stretches from New Year’s through Orthodox Christmas.

The roundtrip ride from a residential area to the Kremlin was the second annual iteration of a winter ride aimed at demonstrating that bicycles can be year-round transport. The popularity of cycling in Moscow has soared in recent years as city authorities improve paths for two-wheelers to navigate the notoriously traffic-choked city.