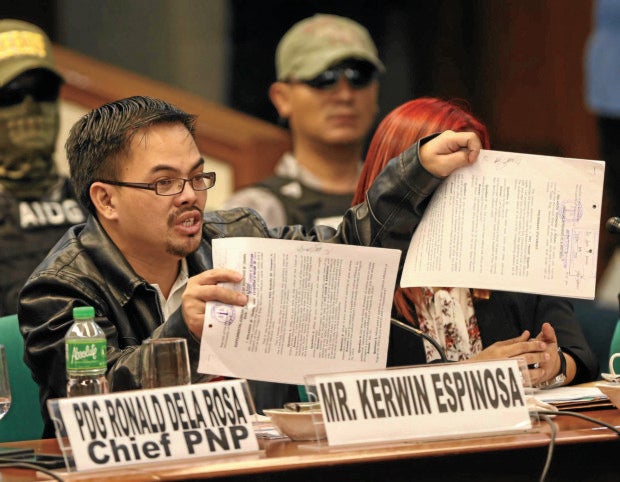 Senators are torn over the grant of state protection to confessed drug lord Kerwin Espinosa, issuing opposing views on whether a suspect considered to be among the nation’s biggest drug traffickers is qualified to be under the Department of Justice’s (DOJ) Witness Protection Program (WPP).

Senate President Aquilino Pimentel III believed Espinosa, one of the biggest drug lords in the Visayas, is qualified to be given WPP coverage, expressing deference to Justice Secretary Vitaliano Aguirre II in making his decision as administrator of the state program.

Espinosa was in the custody of the National Bureau of Investigation, an agency under the DOJ, when he was admitted into the program just before Christmas.

The confessed trafficker had appeared in Senate hearings on the suspicious slay of his father, Albuera Mayor Rolando Espinosa Sr. of Leyte province, who was killed by police operatives while detained in a predawn operation on Nov. 5.

He testified to giving drug money to the senatorial campaign of Sen. Leila de Lima, Aguirre’s archnemesis and among the staunchest critics of the administration’s war on drugs.

“The decision-maker is the DOJ Secretary. He has all the papers, evidence, etc. before him. I defer to his judgment because he is better situated than I am to judge [Espinosa’s] fitness of admission into the WPP,” Pimentel said, adding that the justice chief is the administrator of the program.

Pimentel, President Duterte’s chief ally in the Senate, said Espinosa was “qualified” to be given WPP coverage.

He corrected the impression among many that witness protection was granted only to suspects who were “the least guilty” in a particular crime. He said that “very basic error” in the appreciation of the law and rules had been “repeatedly committed.”

A 1991 law on protecting witnesses provides that any person who is party to a crime and who wants to become state witness may be deemed qualified if “he does not appear to be the most guilty,” among other criteria.