An online group is calling on Supreme Court (SC) Justice Presbitero Velasco not to take part in the resolution of the electoral protest filed by Sen. Ferdinand Marcos Jr. against Vice President Leni Robredo because of the Velasco family’s close ties to both President Duterte and the former senator.

It expressed fears that this might compromise the magistrate’s position on the electoral protest.

“TSM and other groups/individuals are not only monitoring (Justice) Velasco closely, we are actively engaged in a campaign to prevail upon Velasco to inhibit,” Jozy Acosta-Nisperos, the group’s founder, told the Inquirer in a text message on Wednesday.

“He must be aware that to preserve the integrity and impartial administration of justice of the SC, no hint of bias or impropriety must touch any of the justices handling a case. Every justice must be beyond reproach.”

The group has cited photos that Rep. Velasco had posted on Facebook of his family spending Christmas Eve with the President’s family in Davao City as well as pictures on Twitter showing his wife, Wen, having dinner with Mr. Duterte and Marcos at the Presidential Security Group (PSG) compound.

Wen is the founder and chairperson of the Pilipinong May Puso Foundation, formed in honor of the President’s late mother, Soledad. 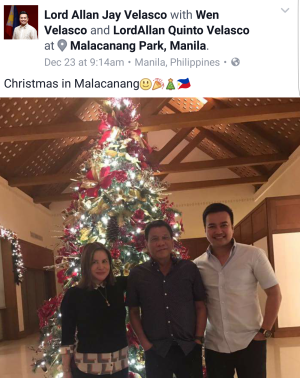 He did not immediately respond to text queries from the Inquirer.

Nisperos said the photos and the accompanying messages implying that the Velasco family is “extremely close” with the President, are a “cause for concern.”

Mr. Duterte has been vocal about his preference for Marcos as vice president.

Justice Velasco is a senior member of the bench and is set to retire in August 2018.

His wife, Lorna, is the mayor of Torrijos town in Marinduque province.

His daughter, Tricia Nicole Velasco-Catera, is representative of the Ang Mata’y Alagaan (party-list in Congress, a post once held by her mother.

Asked whether the congressman’s online posts had compromised his father’s position, former Court of Appeals Justice Hector Hofileña, a legal ethics expert, replied: “I do not see any ethical issue in the absence of any specific case involved.”

Read Next
Comelec starts returning voting machines to Smartmatic
EDITORS' PICK
Over 3 Million worth of prizes to be won at Smart Padala’s SENDali Manalo Promo!
Gear up and get ready to play with Yamaha Mio Gear
Acer starts the year off strong with the Aspire Vero National Geographic Edition
If elected VP, Sara Duterte will push for mandatory military service for all Filipinos
Senate bill seeks to penalize employers requiring employees to work during rest hours
Marcos-era elections: Not what his son signed up for
MOST READ
Jose Manalo’s son Benj pays tribute to late mother: ‘You’re a testimony of God’s love’
‘Sampal sa gobyerno:’ Drilon wants unvaxxed PAO chief barred from working
Vice mayor slams Vico Sotto for turning Pasig into a ‘puro palabas’ city
Bongbong-Sara tandem names 7 candidates in initial senatorial slate
Don't miss out on the latest news and information.