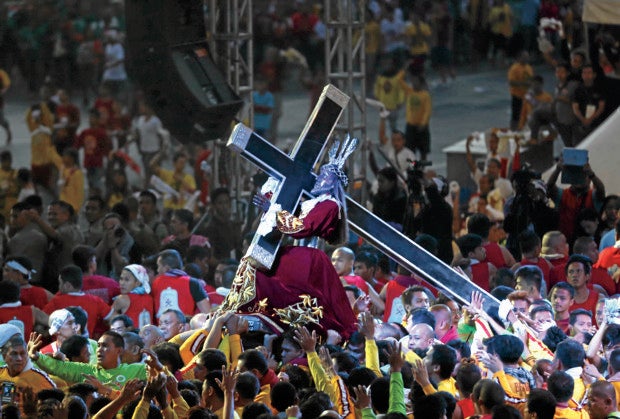 Devotees carry the image of the Black Nazarene to the carroza before the procession from Quirino Grandstand to Quiapo Church in Manila on Friday. INQUIRER PHOTO / NINO JESUS ORBETA

Metro Manila policemen are on full alert to thwart any attempt to disrupt Monday’s Feast of the Black Nazarene in Quiapo, Manila.

National Capital Region Police Office (NCRPO) director Chief Supt. Oscar Albayalde, however, stressed on Thursday that they have not received any specific threat to this year’s Traslacion.

“We’re not saying that there’s no threat. There’s no information yet but the threat is there, let’s make this clear,” he said.

In a press conference at Quiapo Church, Albayalde referred to the discovery of improvised explosives in Manila and thwarted bombing tries.

He also cited the military’s ongoing offensive against terrorist groups in Mindanao such as the notorious Maute Group.

“We cannot just set that aside… The threat is there, but it is not yet clear, present or imminent. So we cannot take this for granted in our security preparations,” he said.

The NCRPO will be fielding 4,190 policemen to secure the estimated 18 million devotees who will join the Traslacion, a highly anticipated event often marred by injuries and deaths of devotees. This is on top of the 650 soldiers to be deployed.

The Metropolitan Manila Development Authority (MMDA) said it would assign 1,200 personnel to assist in traffic rerouting and crowd control.

It also released a traffic rerouting scheme for motorists passing through Manila on Monday.

All vehicles coming from the northern part of the city and headed for Manila Hotel and the Port Area should turn right on Roberto Oca Street and left on Delgado Street.

They should then make a left on 25th Street, then left on Bonifacio Drive and right on A. Soriano Street. Upon reaching Magallanes Drive, they should make a right on P. Burgos Street, then go straight to Lagusnilad toward Taft Avenue.

Those going southbound should make a left on A. Soriano Street.

All vehicles plying the northbound lane of Taft Avenue, on the other hand, should make a right on Antonio Villegas Street and turn right at Quezon Bridge to get to their destination.

The MMDA said the northbound lanes of Quezon Boulevard would be open to vehicles.

All vehicles coming from the southern part of Manila that wish to access the northbound lanes of Roxas Boulevard should make a right on T.M. Kalaw.

Those coming from Quezon City and passing through España should turn right on P. Campa, left on Andalucia, right on Fugoso, then left on T. Mapua to get to their destination.

All jeeps and light vehicles coming from España headed for South Pier should turn left on Nicanor Reyes, right on C.M. Recto and go straight toward Jose Abad Santos. —WITH KRISTINE FELISSE MANGUNAY AND ERIKA SAULER