Sea guards reprimanded for painting sign on back of turtle 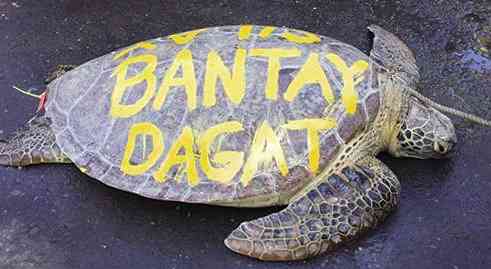 This sea turtle, its carapace vandalized, has been returned to the waters of Silay City in Negros Occidental. —CONTRIBUTED PHOTO

BACOLOD CITY — Bantay Dagat personnel in Silay City, Negros Occidental have been reprimanded for painting on the back of a green sea turtle that was rescued by a fisherman.

They would also be subjected to an orientation on the Wildlife Conservation Act, said Community Environment and Natural Resources Officer Joan Nathaniel Gerangaya.

The green sea turtle, locally known as “pawikan,” was spotted by fisherman Rodrigo Giguera in the waters off Barangay Balaring, Silay City, Negros Occidental, about 5 a.m. on Tuesday.

It measured 33 inches long and had a width of 25 inches, Gerangaya said.

The fishermen turned the turtle over to the Bantay Dagat men who apparently were new on the job, he said.

They said they were not aware of the procedure, which required them to turn the turtle over to the Department of Environment and Natural Resources so that a metal tag could be placed on its flipper to track its migration pattern, Gerangaya said.

Since they did not have a metal tag, they used yellow paint to write on the back of the turtle the words “Silay Bantay Dagat.”

Gerangaya explained that writing on an animal was considered a form of maltreatment, a violation of the Wildlife Conservation Act.

But he added the Bantay Dagat personnel were merely reprimanded since they didn’t have an intent to harm and they even released the turtle back into the sea at 4:30 p.m. Tuesday.

The CENRO would subject the Silay Bantay Dagat personnel to training to prevent further violations, he said.  SFM