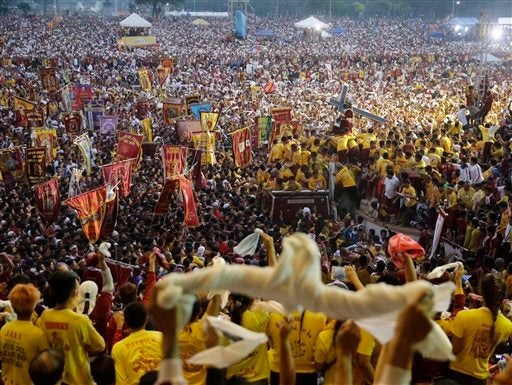 In a new briefing at Malacañang on Thursday, Sueño claimed that there was a “possible terror threat” from Abu Sayyaf bandits and the Maute Group, which was responsible for the September bombing attack in Davao City.

The secretary of the Department of the Interior and Local Government (DILG), which supervises the PNP, confirmed the presence of some members of the Maute group in Metro Manila, citing intelligence reports.

But Dela Rosa said the PNP had not monitored any security threat from any of the terror groups.

“So far, wala pa kaming namomonitor (we haven’t monitored anything) but we respect the pronouncement of the SILG (Secretary of the Interior and Local Government) dahil mayroon din siyang ibang source (because they have other sources),” Dela Rosa said in a press conference at Camp Crame on Thursday afternoon.

The police chief, however, said the PNP is expecting attacks as retaliation from Islamic State of Iraq and Syria (Isis)-inspired groups after the Ansar Al-Khalifa Philippines’ leader Mohammad Jaafar Maguid alias “Tokboy” was killed by the police in an operation in Sarangani Province early Thursday.

Ansar Al-Khalifa, a terror group that pledged allegiance to Isis in 2015, was behind the foiled bombing attack at Rizal Park and later near the United States Embassy in Manila last November.

“We expect retaliation coming from ISII inspired groups such as Ansar Al-Khalifa and Maute since napatay ‘yung leader nila na si Tokboy so we should be very vigilant against this possible retaliation but so far, wala tayong namomonitor na threat,” Dela Rosa said. TVJ

Read Next
PNP to Nazarene devotees: Fear no terrorists, have faith in God
EDITORS' PICK
Metro Manila to remain under COVID Alert Level 2 until December 15
Legarda: Ending Violence Against Women, a cause for all
A delightful blessing!
Duterte open to making jabs mandatory; Cabinet mulls ‘pressuring’ the unvaccinated
IATF tightens border control, suspends entry of fully vaxxed nationals from ‘green’ countries
Villar Group gears up for AllValue Shopping Party on Dec. 3; around P 1-million promos and discounts up for grabs
MOST READ
Quiboloy warns of ‘much worse than Omicron virus’ if his ‘persecution’ is not stopped
Bongbong Marcos’ conviction in tax case not a crime involving moral turpitude — lawyer
Marcoleta defends pol ads on ABS-CBN
IATF tightens border control, suspends entry of fully vaxxed travelers from ‘green’ countries
Don't miss out on the latest news and information.