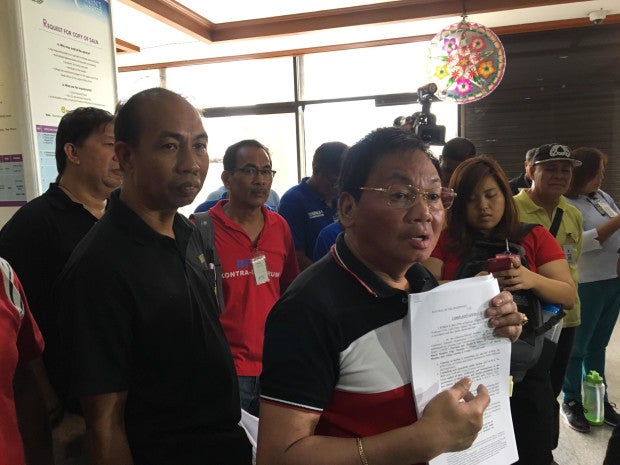 ACTO Chairman Efren de Luna shows a copy of his group’s graft and ethical complaints against members of the LTFRB for failing to act on jeep fare hike petitions on Jan. 5, 2017. (PHOTO BY VINCE F. NONATO / INQUIRER)

MANILA — Citing alleged inaction on its fare hike petitions, a public transportation group has filed a graft and ethics case against officials of the Land Transportation Franchising and Regulatory Board before the Office of the Ombudsman.

Efren de Luna, chairman of the Alliance of Concerned Transport Organizations (ACTO), accused LTFRB of failing to act on its motion to revert the minimum jeepney fare to P7.50.

De Luna invoked the right to speedy disposition of cases under Section 16 of the 1987 Constitution. Yet, he said the LTFRB officials “have continuously slept on cases pending before it, which to date, remain unresolved or undecided for a significant period of time.”

The complaint stated that neither the May 2016 motion to revert the minimum jeepney fare nor the October motion urging an early resolution of the case were ever set for hearing. LTFRB has also not set a hearing for the Dec. 13 motion to increase the fare over fuel hikes.

It also cited a petition for a “rush hour rate” (a form of surge pricing) for jeepneys that has been submitted for decision in March. No order has been issued yet, it said.

De Luna also expressed frustration about LTFRB’s supposed inaction “while it allows the Transportation Network Companies… such as Uber and Grab, to unilaterally implement its own fare scheme” that enabled surge pricing allegedly without going through the mandatory processes of the Public Service Act.

“Being a regulated activity, [public utility vehicle] operators rely heavily on the efficiency and competence of the public officers behind the LTFRB,” the complaint read. “Obviously, if the LTFRB will be inert in acting on this issue, operators will be operating at loss as it is apparent that fuel price will continuously increase.”

He also cited the four applications of other jeepney operators for plate substitution, which have also remained pending for two to three months. Since the plates are surrendered while the proceedings are ongoing, the LTFRB’s alleged inaction deprives the operators of income, according to De Luna.

The LTFRB officials were accused of violating Section 5(a) and 5(d) of the Code of Conduct and Ethical Standards for Public Officials and Employees, which mandated prompt action on letters and personal transactions. They also allegedly violated Section 3(e) of the Anti-Graft and Corrupt Practices Act for causing undue injury through bad faith or negligence.