Leni: Duterte was misinformed; I did not join protests 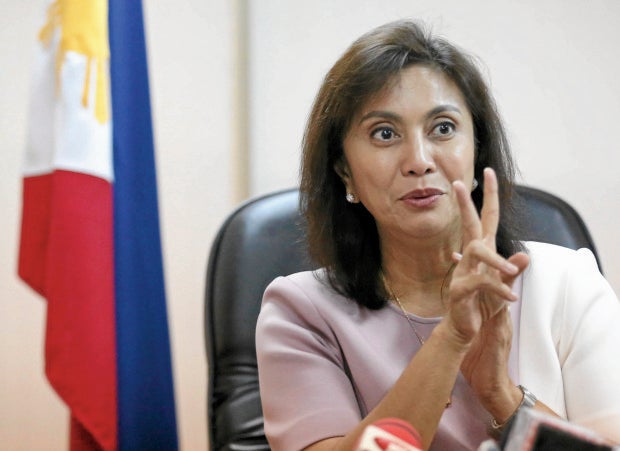 Vice President Leni Robredo said on Tuesday President Duterte was apparently fed false information about her supposed participation in recent protest rallies, saying she never joined any of them, including those against the burial of dictator Ferdinand Marcos at Libingan ng mga Bayani despite her opposition to the interment.

“Even the media knows that I did not join any rally,” she said in Filipino. “I have been very vocal in opposing the burial [of Marcos at Libingan], but I deliberately did not join the rallies in deference to the President because I was a member of the Cabinet.”

“But if the reports to him was that [I joined the protest rallies], then it is sad that he believed them because many know that is not true,” Robredo said.

Robredo said the administration could verify the veracity of the reports received by the Office of the President given that it supervises all intelligence agencies.

Shortly after the anti-Marcos burial protests, Robredo was told by Malacañang to stop attending Cabinet meetings, forcing her to resign as the top government housing official.

Robredo said she had tried to set an appointment with President Duterte after she was suddenly barred from attending Cabinet meetings but she was not accommodated by Malacañang.

President Duterte said in recent interviews that he was disappointed that the vice president joined protest rallies even as he had gone out of his way to give her a Cabinet post and make her part of his administration.

Mr. Duterte claimed he had seen Robredo at the rallies. She had not joined any of these protests.

The sudden burial of the dictator at Libingan on Nov. 18 sparked two large protests, which also heavily criticized Mr. Duterte for allowing it.

On the day that coincided with one major anti-Marcos burial rally on Nov. 30, Robredo was at the installation of new names of heroes who fought the Marcos dictatorship at Bantayog ng mga Bayani. She did not appear at the People Power Monument where the protest was held.

A transcript of Robredo’s statements was sent by her office to Manila-based reporters from Camarines Sur where she checked ongoing relief and rehabilitation operations in the wake of Typhoon Nina.

The Vice President proceeded to Bicol on Tuesday, a day after arriving from the United States where she spent Christmas. She is set to spend the rest of the week in the typhoon-ravaged region, visiting various towns in Camarines Sur and Albay.

Supporters of President Duterte criticized Robredo for spending a “white Christmas in New York City” while Naga City was hammered by Nina. Robredo actually spent Christmas with her sister-in-law in Philadelphia.

She said she regretted that she was out of the country when the typhoon swept through Bicol, including her hometown.

Making up for her absence

“If I could turn back time, I would rather that I was here [when the typhoon hit],” she said. “I am now making the best out of the situation. I cannot turn back time but I am making up [for my absence].”

She added that her entire staff had been assisting typhoon victims even while she was away.

Robredo, who flew to the United States on Dec. 23, said she had wanted to return to the Philippines immediately but had difficulty rebooking her flight with her three daughters and 80-year-old mother in tow. Her family was finally able to book a flight on New Year’s Eve (Jan. 1 in Manila).

Robredo said her family had been spending Christmas away from Naga City after the death of her husband, Interior Secretary Jesse Robredo, and three other relatives in 2012.

Commenting on the pace of typhoon rehabilitation, Robredo said it was a bit “unusual” that eight days after the storm hit, electric power had not be restored to 50 percent of the affected areas. She has requested a meeting with the electric cooperative officials to determine how to accelerate restoration of electricity.

Robredo also said that with the extensive crop damage, livelihood would be another problem to those who suffered from the typhoon.

She said her office would help the typhoon victims with the requirements to fast-track assistance from the Department of Agriculture. —WITH A REPORT FROM JUAN ESCANDOR JR.