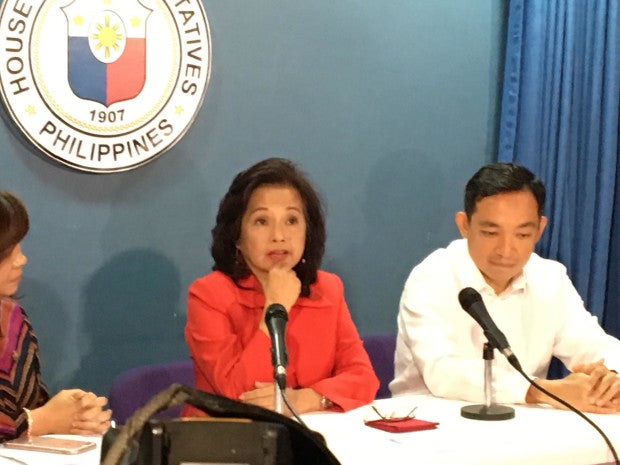 In a statement, the deputy speaker said she filed House Bill 731 to amend the New Central Bank Act to “liberate” the BSP from the “rigorous demands” of supervising the AMLC in its criminal investigation.

Athough the bill would clip BSP Governor Amado Tetangco’s powers, Arroyo said career technocrats like Tetangco, whom she called a “fine technocrat,” did not have the “temperament and training” to supervise AMLC’s  investigations.

Although Tetangco’s term is set to expire in July this year, President Rodrigo Duterte is reportedly planning to reappoint him and have the law amended to allow the BSP governor to be reappointed more than once.

According to the New Central Bank Act of 1993, members of the BSP’s policymaking Monetary Board—chaired by the governor – may only be reappointed once.
Arroyo said the AMLC had been acting on its own without seeking Tetangco’s clearance in its bank inquiries.

Arroyo said this has led  the AMLC to become a political tool for selective justice, citing a leak during the campaign season about Duterte’s Bank of the Philippine Islands bank account that allegedly contained P211 million in hidden wealth.

She said the AMLC officials owed their allegiance to the appointing authority like Aquino, who launched an anti-corruption platform targeting the administration of Arroyo.

During the Aquino administration, Arroyo was placed under hospital detention for plunder for the alleged misuse of charity funds, a case which was dismissed by the Supreme Court last July for lack of evidence.

“Though Tetangco has unquestionably served the BSP itself with distinction, his supervision over the AMLC has exposed some problems. The said agency has been acting much on its own with regard to its investigations, without bothering to get specific clearances from the BSP governor,” Arroyo said.

“The AMLC, whose officers were appointed by the previous administration, has demonstrated the potential of being used as a tool of selective justice,” she added.

Arroyo hinted at the AMLC’s refusal to investigate Senator Leila De Lima, Aquino’s former justice secretary who faces allegations of earning millions of kickbacks from the drug trade in the New Bilibid Prison.

“In the previous administration, grossly inaccurate information on the alleged bank accounts of then presidential candidate Rodrigo Duterte and other perceived opponents of the officers’ appointing authority were leaked out,” Arroyo said.

“In contrast, information is now being withheld from authorized investigators on the bank accounts of certain persons under investigation, who happen to be identified with the previous authority which appointed them, and to whom they seem to owe their allegiance,” she added.

Arroyo’s bill seeks to amend Section 128 of the proposed New Central Bank Act, to specifically prohibit the BSP from supervising the operations of the AMLC.
The BSP governor however may still serve as a member of the AMLC.

“Therefore, to insulate the BSP officials from the actuations of AMLC, especially the political ones which may be influenced by the Council officials’ loyalty to their appointing authority, the BSP should be liberated from the burden of supervising the very rigorous demands of criminal investigation such as those performed by AMLC,” Arroyo said.

Duterte earlier criticized the AMLC for being corrupt and for meddling in politics for its refusal to cooperate with the National Bureau of Investigation (NBI) to look into the bank accounts of alleged drug criminals.

He claimed one influential family, which he did not name, laundered up to P5.1 billion in drug money under AMLC’s nose.

Justice Secretary Vitaliano Aguirre has hit the AMLC for its refusal to help the NBI investigate the alleged drug trade at the New Bilibid Prison that supposedly raised campaign funds for De Lima’s senatorial bid. CBB/rga