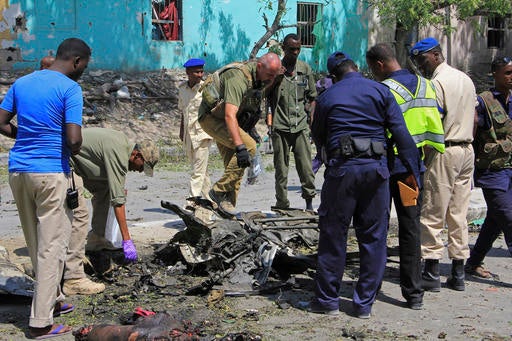 Somali soldiers stand over the wreckage of a car bomb in Mogadishu Somalia, Thursday, Dec. 15, 2016. A Somali police officer says a suicide car bomber detonated an explosives-laden vehicle near a restaurant in the Somali capital Thursday, killing one and injuring three others. Capt. Mohamed Hussein said the attacker detonated the massive bomb after his car overturned during a high-speed chase by police near the presidential palace in Mogadishu. AP

Capt. Mohamed Hussein said the bomb detonated as security forces were searching cars at the checkpoint, a few hundred meters (yards) from the main base of the African Union peacekeeping mission.

The checkpoint is close to United Nations offices and the Peace Hotel, which is often frequented by foreigners and officials. The powerful blast blew roofs off nearby buildings.

A second blast and heavy gunfire could be heard shortly afterward.

The first blast destroyed the checkpoint run by the Somali national security forces, the African Union mission said on Twitter. The explosion allowed a second bomb-laden vehicle to pass, but AU forces “engaged” it and it exploded about 200 meters from Medina Gate, the AU mission said.

The al-Qaida-linked Islamic extremist group al-Shabab, which often carries out such attacks, quickly claimed responsibility for Monday’s attack through its radio arm, Andalus.

Despite being ousted from most of its key strongholds across large parts of south and central Somalia, the homegrown group continues to wage deadly attacks across the country.

Somalia’s capital has seen frequent bomb attacks at hotels and military checkpoints. In July, two al-Shabab suicide bombers detonated explosives-laden cars outside the office of the UN’s mine-clearing agency and an army checkpoint near the African Union’s main base, killing 13. The site of the attack was near the site of Monday’s blasts.

The assaults have threatened this Horn of Africa nation’s attempts to rebuild from decades of chaos. The country’s presidential election, a key step toward recovery, already has been delayed multiple times because of security and other concerns. /TVJ /ATM

ADVERTISEMENT
Read Next
17 still missing after Indonesia boat fire kills 23
LATEST STORIES
After winning title, time for LA Tenorio to give back to Batangas folk
‘Mia’: Rom-com with a cause a career-boosting showcase for Coleen Garcia
No.13 lucky for Orlando Bloom
The ties that bind: Why the guys of Black Eyed Peas prefer to stay together
How Yam handles flirtatious guys
MOST READ
Nadine Lustre’s phone stolen in Brazil
Will you be the first P16 Billion Powerball jackpot winner from the Philippines?
Gretchen Barretto’s daughter Dominique graduates magna cum laude from California college
Ginebra beats Meralco again to capture PBA Governors’ Cup title
Don't miss out on the latest news and information.