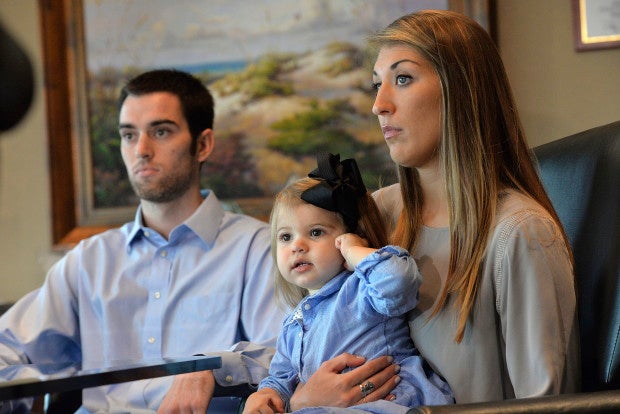 Courtney Thorne, right, holds her daughter Ava-Kate during a press conference on Wednesday, Dec. 21, 2016, in Jacksonville, Florida. At left is the child’s father, Cole Parsons. Ava-Kate swallowed a button-type battery that became lodged in her esophagus, resulting in burns when it was not removed promptly at Wolfson Children’s Hospital. The toddler is now undergoing medical procedures at Boston Children’s Hospital every two weeks. The family announced pending legal action at the Edwards and Ragatz law firm in Jacksonville. AP

MIAMI, United States — A Florida family sued a hospital for malpractice on Wednesday, saying their baby suffered severe burns because it took too long to remove a coin-sized battery that she swallowed.

Parents Cole Parsons and Courtney Thorne said in a lawsuit that Wolfson Children’s Hospital in Jacksonville should have taken out the lithium battery within two hours, which is recommended by poison control centers. They also sued Dr. David Smith, who they say downplayed the dangers. The battery was removed about five hours after the parents arrived at the hospital, the complaint said.

Nineteen-month-old Ava-Kate Parsons has undergone 20 surgeries since she swallowed the battery March 10. Her mother was at home at the time and saw as her daughter swallowed the coin battery that popped out of a remote control. She rushed to get it out, but it had gone down her throat, and she called 911.

The National Capital Poison Center, a nonprofit call center, said more than 1,900 children swallowed button batteries last year and there were 20 fatal or major incidents in children younger than 6. Those batteries are found in remote controls, calculators and other small devices.

At the hospital, the parents wanted the battery taken out right away because they worried the girl would be exposed to dangerous chemicals. But the father said Smith told them the incident was “no different than a coin in her throat.”

“He seemed pretty relaxed about the whole situation,” Parsons said. “A little while later, we learned there is an electrical burn taking place in her esophagus, and she was rushed to emergency surgery.”

Attorney Eric Ragatz said the amount the parents are suing for is yet to be determined. He said they have spent between $300,000 and $400,000 on medical bills, not counting what they spent traveling to Boston to take Ava-Kate for treatment every two weeks. The girl’s mother, a nursing assistant, also took a leave from work and only returned part time to care for her daughter.

Parsons said doctors have told him their daughter may need to continue treatment to stretch out the esophagus well up into her teens. While other toddlers her age experiment with foods of many textures, she can only eat pureed food, which Parsons says has slowed down her growth.

“They really don’t have a lot to say about what exactly her course is going to be,” Parsons said. “We are stressed out about the unknown.” CBB

Read Next
Sotto: Ubial won’t get CA nod if DOH gives out condoms in schools
EDITORS' PICK
Duterte signs law giving rights, more protection to foundlings
Comelec won’t proclaim party-list groups yet
DOJ-led panel drops 29 cases of torture, EJKs
Luxe property: A way to build, preserve wealth
House energy committee chair Arroyo bats for cheap electricity
Honolulu Café is the cure for your Egg Tarts and Roastings cravings
MOST READ
Heart Evangelista gets a ‘no’ from Chiz Escudero after asking, ‘Do I deserve a bag?’
Congress canvassing of votes for president, VP to begin May 24
Pahiyas Festival back but tourists greeted with austere celebration
Duterte signs law providing protection to consumers
Don't miss out on the latest news and information.