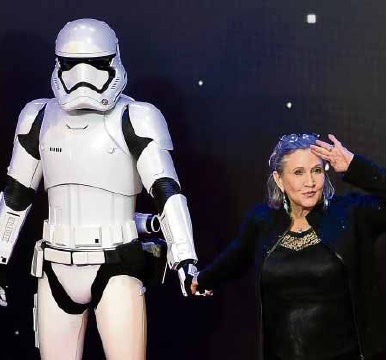 LONDONSHOW Actress Carrie Fisher,who is known ton millions of fans worldwide as Princess Leia of “Star Wars,” appears with a Stormtrooper during the opening of the European premiere of “StarWars: The Force Awakens” in central London in this photo taken in December last year. —AFP

NEW YORK—No one could make us laugh through the pain like Carrie Fisher.

The daughter of Hollywood stars Eddie Fisher and Debbie Reynolds, and a survivor of early fame, drug addiction and bipolar disorder, she wrote with unsentimental wit and understanding about her private struggles and about an industry she was raised in but stood apart from.

Fisher, known to the world as Princess Leia of “Star Wars,” died on Tuesday at 60, four days after falling ill aboard an airline flight.

Media reports said the actress had suffered a heart attack.

“I do believe you’re only as sick as your secrets. If that’s true, I’m just really healthy,” she said in a confessional 2009 interview with The Associated Press (AP).

Born in Los Angeles in October 1956, Fisher became an international star overnight with the release of “Star Wars” in 1977.

Leia was the tough rebel princess in a white dress with a strange hairdo and blaster guns, who was unafraid to stare down the villainous Darth Vader.

Six years later in “Return of the Jedi,” she became a sex symbol in a barely there metal bikini—but remained the tough heroine, killing her slug-like gangster jailer Jabba the Hutt by choking him with the chain he used to hold her captive.

The blockbuster space saga is now part of pop culture legend and a worldwide fan favorite.

Fisher was back in the spotlight after reprising her iconic role in 2015’s “Star Wars: The Force Awakens.”

She was returning on Friday from the London leg of a tour promoting her headline-grabbing memoir “The Princess Diarist” when she collapsed 15 minutes before landing in Los Angeles, where paramedics and hospital staff were unable to revive her.

“It is with a very deep sadness that Billie Lourd confirms that her beloved mother Carrie Fisher passed away at 8:55 this morning,” family spokesperson Simon Halls said in a statement to Agence France-Presse (AFP) on behalf of Fisher’s daughter.

Tributes began pouring in soon after news of her death spread on social media, led by “Star Wars” costar Mark Hamill—Luke Skywalker in the saga—who initially tweeted that he was “devastated” and had “no words.”

“It’s never easy to lose such a vital, irreplaceable member of the family, but this is downright heartbreaking,” he said later. “Carrie was one-of-a-kind who belonged to us all—whether she liked it or not.”

The legendary filmmaker Steven Spielberg described her as “a force of nature, of loyalty and of friendship,” while Walt Disney Co. chief Bob Iger said she was “a true character who shared her talent and her truth with us all.”

Lucasfilm said on Tuesday that Fisher had completed her work in an as-yet-untitled eighth episode of the main “Star Wars” saga, which is scheduled to be released in December 2017.

The public fell in love with her twice: as Princess Leia and as the wry truth-teller of such books as “Postcards from the Edge,” “Wishful Drinking” and “The Princess Diarist,” in which she revealed having an intense affair with “Star Wars” costar Harrison Ford.

Fisher told plenty of secrets about others—about her parents’ breakup when she was 2, about being advised by Warren Beatty on wearing a bra in “Shampoo,” and about arguing with then husband Paul Simon about whether it was better to be a man or a woman.

Asked by National Public Radio recently why she wrote about her fling with Ford, who was 15 years older and married, she joked that she could hold back no longer because he had refused to die: “I kept calling and saying, ‘When are you going to die because I want to tell the story?’”

But she was toughest on herself and unafraid to turn trauma into humor.

She became the most knowable of celebrities, with a great and generous gift for bringing us into her unusual life.

“One of the therapists came in to admit me and asked how long I had been a drug addict,” she wrote in “Postcards,” her autobiographical novel that became a movie of the same name.

“I said I didn’t think I was a drug addict because I didn’t take any one drug. ‘Then you’re a drugs addict,’ she said. She asked if I had deliberately tried to kill myself. I was insulted by the question. I guess when you find yourself having overdosed, it’s a good indicator that your life isn’t working.”

She is survived by her mother; her daughter, Billie Lourd, from a relationship with talent agent Bryan Lourd; her brother, the actor-filmmaker Todd Fisher; and her half-sisters, actresses Joely and Tricia Leigh Fisher. Her father died in 2010.

Born and raised in Beverly Hills, Carrie Fisher was a bookish child who had difficult relationships with both parents.

In a celebrity breakup that made headlines everywhere in 1958, Eddie Fisher left his family for Elizabeth Taylor.

Eddie Fisher was hardly present for his daughter in her early years, and Reynolds’ second husband, shoe store magnate Harry Karl, was even worse.

He squandered his own money and Reynolds’ on gambling and prostitutes and left the actress and her children broke and devastated.

Carrie Fisher went into the family business early—too early, she would later say.

She was performing on stage by age 12 and appeared with Reynolds in the 1973 Broadway revival “Irene.”

She was still a teenager when she made her feature film debut in “Shampoo” in 1975.

Even after “Star Wars,” Fisher would speak often of feeling overshadowed by her mother and about the need to break away, a conflict dramatized in “Postcards from the Edge.”

Her film credits included a wide range of spoofs, musicals and romantic comedies, from “Austin Powers” and “The Blues Brothers” to “Hannah and Her Sisters” and “When Harry Met Sally.”

But for millions, Fisher was Princess Leia, with her now-iconic hair bagels and metal bikini.

She uttered the immortal phrase “Help me Obi-Wan Kenobi, you’re my only hope” in the original “Star Wars” in 1977. —REPORTS FROM AP, AFP AND NEW YORK TIMES NEWS SERVICE