Duterte: Cash from tycoon will go to barangay execs as bonuses 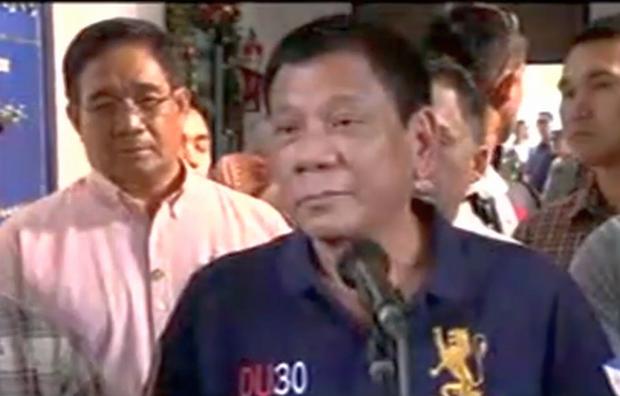 DAVAO CITY – Barangay (village) officials here were ecstatic on Tuesday when President Duterte announced he would give them “probably” P50,000 in additional bonus each.

The officials, who gathered at the Almendras Gym here, were visibly more overjoyed when Duterte later said “maybe P100,000.”

But when Presidential Management Staff Chief Christopher Go approached and whispered something to him, Duterte announced that barangay captains would just get P10,000 each and village councilors would get P3,000 each.

Even when their bonus got drastically reduced in less than 10 minutes, the village officials still applauded the President.

Davao City has 187 villages, which means for village chiefs alone, Duterte will be giving away P1.87 million.

In his speech, Duterte said the money he has been giving away as additional bonuses and Christmas gifts to officials and other recipients did not come from government coffers.

Duterte said the money was given to him by a tycoon – whom he did not identify – as campaign contribution but he had turned it down and ordered its return.

He said he did not include the money, the amount of which he did not specify, in his statement of contribution and expenses (SOCE) because he had not formally accepted it in the first place.

“I returned the money but he refused to take it back,” Duterte said, adding that the tycoon told him to use it anyway he wanted.

He said since the money was entrusted to him by the tycoon and that he was given a free hand to spend it, he decided to give it to the people this Christmas.

During and after the campaign, Duterte had repeatedly said that he had turned down offers by some businessmen to fund his presidency.

He said among those whose offer he had rejected were tycoon Lucio Tan and owners or officials of mining companies.

Duterte reasoned out he did not accept the offers because of their interests or business with the government.

“I assure you that I never really accepted money from any mining company. That I can assure you,” he said shortly after winning the presidency.

He said he has always considered accepting campaign money from businesses with interests or deals with government a bad practice and the quickest way to compromise his leadership.

Duterte then announced his intention to open up the economy to more players, adding that “(t)he only way for the deliverance of this country is to remove it from the clutches of the few people who hold the power and money.”

He said oligarchs and capitalists, who have been in control of the country’s economy for so long, could not prevent him from doing so because he had no debt of gratitude to them.

“I do not owe you anything, that’s precisely why I was avoiding you during the last election. I am not trying to destroy you. You have the advantage, you’re here already, be content with that. But let us open everything,” he told reporters last month.

“I would like just to send this strong message, it’s about time that we share the money of the entire country and to move faster, make competition open to all. You stymie competition, and we will always be at the mercy of the corrupt people,” he said.  SFM