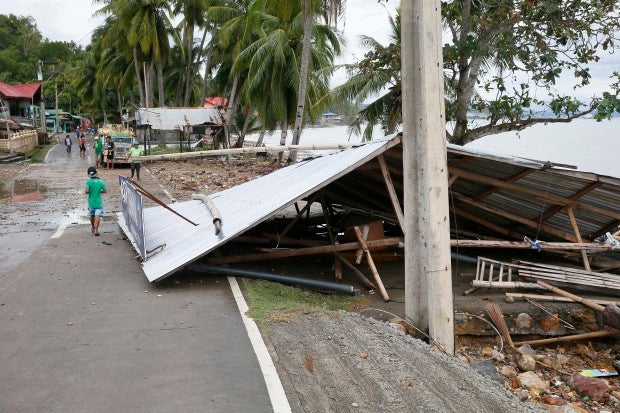 The entire roof of a store partially blocks the road after being swept by typhoon Nock-Ten, at Mabini township, Batangas province south of Manila, Philippines a day after Christmas Day on Monday, Dec. 26, 2016. The powerful typhoon slammed into the eastern Philippines on Christmas Day, spoiling the biggest holiday in Asia’s largest Catholic nation but weakened slightly on Monday as it roared toward a congested region near the country’s capital, officials said. They said that Typhoon Nock-Ten cut power to five provinces as well as displacing thousands of villagers and travelers in Asia’s Catholic bastion.(AP Photo/Bullit Marquez)

Nina (international name Nock-Ten) has weakened to a severe tropical storm as it continued to move away from the country, the state weather bureau said midday Tuesday.

The storm packed maximum sustained winds of up to 105 kilometers per hour near the center and gustiness of up to 130 kph, the Philippine Atmospheric Geophysical and Astronomical Services Administration (Pagasa) said.

It moved west southwest at 17 kph.

Nina was last located 440 kilometers west of Iba, Zambales, and is expected to exit the Philippine area of responsibility by Tuesday evening.

Pagasa advised against sea travel over the seaboards of Northern Luzon and the western seaboard of Central Luzon. JE/rga