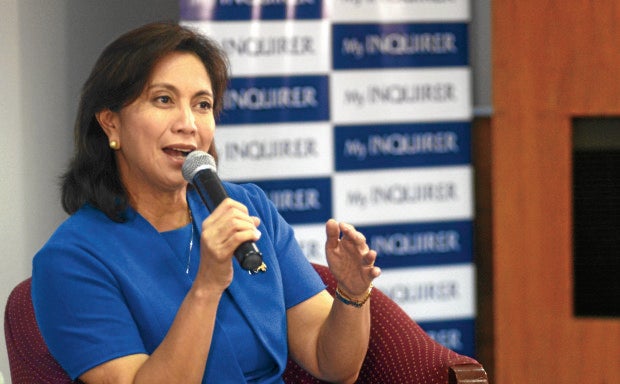 Vice President Maria Leonor “Leni” Robredo on Friday said the threat of a return to martial law 30 years after the ouster of a dictator in the historic Edsa People Power Revolution is “the worst Christmas gift to the Filipino people.”

Reacting to President Rodrigo Duterte’s remark that he wanted to amend martial law provisions under the 1987 Charter, Robredo said the move of the Chief Executive to “challenge the democratic safeguards of the very Constitution he swore to uphold” was “appalling.”

“To refer to specific provisions in the 1987 Constitution prohibiting such as a ‘reckless reaction’ to the Marcos regime is an insult to the experience of the Filipino nation that endured great suffering and hardship under the Martial Law regime,” Robredo said in a statement.

In a speech in Angeles City, Pampanga, Duterte on Thursday said he wanted to amend the provisions on martial law declaration and the term limits for local officials under the 1987 Constitution.

Duterte said he wanted the declaration martial rule to be the sole prerogative of the President without the approval of Congress and the Supreme Court.

“Martial law powers are subject to review by the SC and by Congress. [If you declare] martial law [and in the event of] invasion [or war], I cannot proceed [and especially when there’s trouble, I still have to go to] Congress, [and go to the Supreme Court],” Duterte said.

Robredo urged Filipinos to remain vigilant against the threat of martial law and to “fight against any move that will curtail our freedoms.”

“This is not a battle we will take sitting down. As Filipinos, we have demonstrated our courage to stand up and make our voices heard for the sake of protecting our freedom and fighting for the truth,” the Vice President added. JE/rga