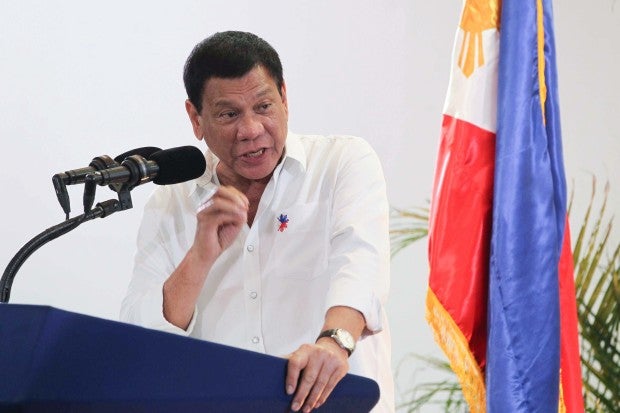 President Duterte on Monday linked former Rep. Vicente Belmonte and former Mayor Lawrence Cruz, both of Iligan City, to the illegal drug trade, saying they were among those on his voluminous narcolist.

These officials were the latest to be tagged by the President, who has promised to pursue his antidrug campaign amid concern and criticism over the extrajudicial killing of drug suspects.

In a speech in Malacañang, Mr. Duterte once more defended the crackdown and explained his directives to law enforcers to be relentless in their pursuit of the destruction of the illegal drugs apparatus.

Before brandishing his list of officials linked to drugs, the President said the Philippines had been a narcostate, and the extent of the problem would not have been discovered had he not become Chief Executive.

He said that when he started to “squeeze” everybody, he found out that barangay captains, mayors, governors and several congressmen were involved in the distribution of “shabu,” or methamphetamine hydrochloride.

“We have been corrupted and this is why I cry every night,” he said.

Mr. Duterte lamented that a senator whom he had linked to illegal drugs had been “glorified” with an award in Washington, referring to his vocal critic, Sen. Leila de Lima.

De Lima, a former justice secretary and former chair of the Commission on Human Rights, was among the 100 Foreign Policy Global Thinkers recognized in Washington.

Mr. Duterte said he had given a copy of his drug list to the leaders of the House of Representatives and the Senate because he could not handle the problem alone.

Speaking at the Presidential Awards for Filipino Individuals and Organizations Overseas, he said the drug problem in the Philippines was “very serious” and that it was not easy to go about rehabilitating drug addicts that by his count had reached 4 million.

This was the reason for his stern warnings to drug users and peddlers, he said. “Stop drugs or I’ll kill you. You want to stay alive? Stop drugs. You want death? Go on with the drugs,” he said.

He reiterated his promise that the campaign would continue up to the last day of his term.

Mr. Duterte again denied that government forces were behind the extrajudicial killing of drug suspects.

Members of the Armed Forces of the Philippines, who he had called to help the police fight the drug scourge, would never follow orders to execute drug suspects, he said.

“If you force them to commit a crime, they will mount a coup d’etat, believe me, all of them, the officers, the noncommissioned and commissioned officers,” he said.

“We have an Armed Forces who will never, never do that,” he added.

But he also said that about a third of the drug suspects were killed in encounters with the police.

He said the police usually win in such encounters because they operate in groups. He knew about such things because when he was Davao City mayor, he walked the streets at night, even alone.

Mr. Duterte mentioned Belmonte and Cruz as drug protectors in Northern Mindanao in a speech before business leaders last week.

In an interview with a radio station in Iligan on Friday, Cruz denied the accusation. “I am innocent. Even if I have to undergo a drug test today, I will test negative,” he said.

Politics could be behind his inclusion in the list, he said, but he did not name names.

Cruz said he now feared for his life and could end up dead like Mayor Rolando Espinosa Sr. of Albuera, Leyte province, who was killed inside his detention cell after being tagged as one of the biggest drug lords in Eastern Visayas.

Cruz said he feared his house would be raided and evidence planted just to back up Mr. Duterte’s information.

There was no immediate reaction from Belmonte. —WITH A REPORT FROM JIGGER JERUSALEM