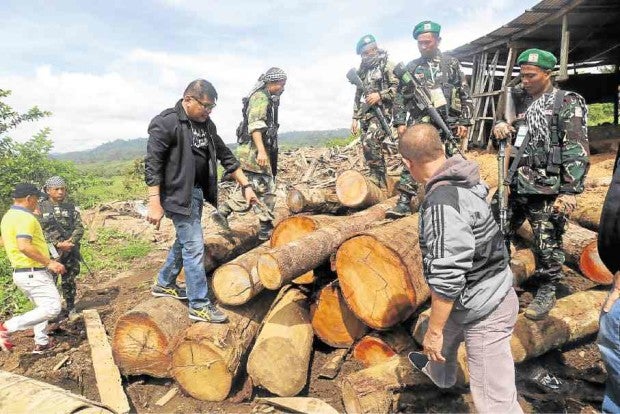 COTABATO CITY – Eleven truckloads of illegally cut logs were confiscated and two sawmills were closed in Lanao del Sur by Department of Environment and Natural Resources in the Autonomous Region in Muslim Mindanao (DENR-ARMM) on Saturday.
DENR-ARMM Secretary Kahal Kedtag said with police and military escorts, they were led by local government officials to Maguing, Lanao Sur where the forest products worth over a million pesos were seized.

Kedtag has yet to name the people behind the illegal cutting of trees in the watershed area of Lanao del Sur and Lanao del Norte.  The watershed is under the administrative control of DENR-Northern Mindanao.

Even the operators of the two sawmills in Maguing, which the DENR-ARMM ordered closed, have yet to be named as further investigation of the illegal activity is going on.

He reiterated though that the cutting of trees in the ARMM has been strictly prohibited following the issuance of the 2012 Executive Order No. 1, which declared a “total log ban” in the five provinces and two cities of ARMM.

“We have yet to determine if the clearing activity to convert the forest area into agriculture is a violation. But on second thought, it is a violation because the cutting of trees was within the watershed area,” Kedtag said.

He explained that although the area in question has been under the jurisdiction of DENR-Northern Mindanao, “ARMM has the responsibility when it comes to the forest protection since the illegal operation happens within the ARMM territory.”

As a necessary action, Kedtag proposed the signing of a Memorandum of Understanding with DENR-10 (Northern Mindanao) to avoid a similar problem in the future.”

Kedtag promised to help affected communities, which have been into cacao, coffee, rubber and other tree-growing ventures without violating existing environmental laws.

At the moment, he said, all seized logs and sawmill paraphernalia have been turned over to the Anti-Illegal Logging Task Group of Lanao Sur while all other legal proceedings have started.  SFM