DENR cancels ECC of Davao Or. mine; Benguet Mining probed on spill

The Mt. Hamiguitan in Davao Oriental is a major habitat for the Philippine Eagle. (INQUIRER FILE PHOTO)

MANILA — The Department of Environment and Natural Resources has cancelled the environmental compliance certificate of a mining project near two “heritage sites” in Davao Oriental.

This was in line with Environment Secretary Gina Lopez’s pronouncement on Thursday that the DENR decided to “adopt social justice at its very core, as the fulcrum of all its endeavors.”

At the same time, Environment Secretary Gina Lopez ordered Benguet Mining Corp. to explain its “negligence” in allegedly failing to rehabilitate an open pit and causing a toxic spill that contaminated a river.

Show-cause orders were also issued to 11 other projects for failing to meet the conditions set in their respective ECCs.

According to the Invest Philippines website, an ECC is a document issued by the DENR certifying that a possibly high-impact project would not cause significant negative environmental impact.

The ECC contains specific measures and conditions that a project proponent has to undertake before and during operations.

Austral-Asia’s 5,000-hectare concession area has been sandwiched between two environmentally diverse areas, a bonsai forest and a habitat for the critically endangered Philippine eagle, said Lopez during a press briefing Thursday.

She said the place has been found with “tremendous biodiversity” and resources “which, if explored and nurtured, can actually transform the area into an economic zone.”

The communities in the area are “very, very unhappy about the mining that’s happening there,” according to Lopez. 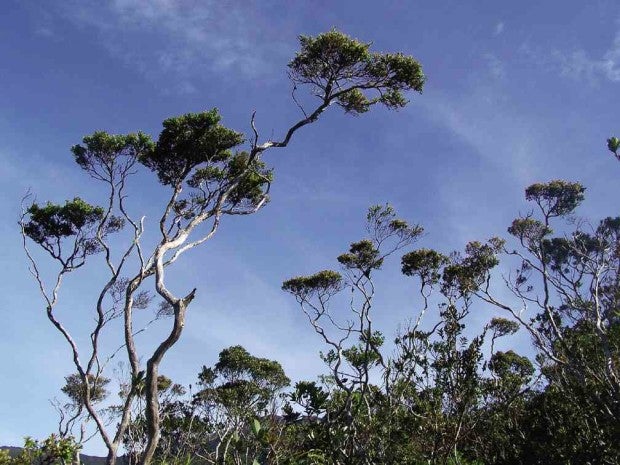 “So, we have decided that in the context of social justice and the common good, that it is appropriate that we cancel the ECC there,” she said.

DENR Undersecretary for Legal Affairs Maria Paz “Ipat” Luna said there was “a failure to meet certain conditions of the ECC.”  Another concern for the DENR is the Philippine eagle habitat, which is less than five kilometers away from the mining site, according to Luna.

“There are also biodiversity considerations that constrained us to say this is not going to work,” Luna said.

The projects never took off, and Luna explained that for these projects to be pursued, the companies would have to apply for new ECCs befitting the current environmental conditions in their locations.

The DENR also denied the application of Egerton Gold Philippines for an ECC for a proposed gold mine in Lobo, Batangas. Lopez said the project might affect another nearby “gold mine”—the biodiversity hub of the Verde Island Passage.

“Having a gold mine there is out of the question. It’s incompatible that the operation with the biodiversity conversation status of Verde Island Passage,” she said.

Besides the cancellation of the aforementioned ECCs, the DENR also issued show-cause orders for various companies to explain why their ECCs should not be revoked and why they should not be fined for alleged failure to meet the conditions of the certifications.

In the case of Benguet Mining, Lopez gave it two weeks to answer the allegations of negligence against the firm, as she railed against its supposed failure to rehabilitate an open pit for 25 years. “You know, after you mine, you should rehab the area,” she said.

She also cited a toxic spill that contaminated a 1.8-kilometer stretch of a river in the Cordillera, which supposedly stemmed from a tunnel crack. “This is not force majeure, it’s a negligence thing,” she said.

“Under the law, if you have a pathetic track record… you can in fact by law be declared ineligible to mine,” Lopez said.

Another six were issued on the operators of various plants and quarries:
*  the iron or pelletizing plant of the Philippine Sinter Corp. in Villanueva, Misamis Oriental (ECC issued April 2009);
*  the veneer manufacturing expansion project of Hantex Manufacturing Corp. in Bayugan City, Agusan del Sur (January 2010)
*  the smelting plant project of Wan Chiong Steel Corp. in San Simon, Pampanga (February 2010)
*  the quarry projects of Mindanao Portland Cement Corp. and LaFarge in Iligan City, Lanao del Norte (May 2010);
*  the cement and power plant project of the Century Peak Corp. in Pinamungajan, Cebu (April 2015), and;
*  the proposed limestone and pozzolan quarry of the Century Peak Corp. in Pinamungajan, Cebu (July 2015).  SFM