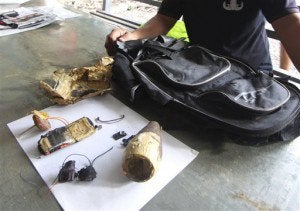 Lt. Col. Joselito Pastrana, the commander of the 65th Infantry Battalion, said the explosions took place as a convoy of military trucks was passing by the area past 5 p.m.

Pastrana said based on the accounts of those in the convoy, the lead vehicle was hit in one of the blasts, wounding one of the soldiers. A motorcycle passing by the area rammed into the lead military truck, which abruptly stopped when the explosion took place. The motorcycle driver and his three passengers were injured.

He said the explosions were caused by two improvised explosive devices, made up of C4 and packed with nails.

All the wounded victims were rushed to the Amai Pakpak Hospital here for treatment.

Pastrana believed the explosion was set off by the Maute group, which has been the target of a massive military operation in Lanao del Sur since early this year.  SFM/rga

Read Next
Not enough evidence yet to impeach Duterte for mass murder—solons
EDITORS' PICK
Metro Manila to remain under COVID Alert Level 2 until December 15
Legarda: Ending Violence Against Women, a cause for all
A delightful blessing!
Duterte open to making jabs mandatory; Cabinet mulls ‘pressuring’ the unvaccinated
IATF tightens border control, suspends entry of fully vaxxed nationals from ‘green’ countries
Villar Group gears up for AllValue Shopping Party on Dec. 3; around P 1-million promos and discounts up for grabs
MOST READ
Quiboloy warns of ‘much worse than Omicron virus’ if his ‘persecution’ is not stopped
Bongbong Marcos’ conviction in tax case not a crime involving moral turpitude — lawyer
Marcoleta defends pol ads on ABS-CBN
IATF tightens border control, suspends entry of fully vaxxed travelers from ‘green’ countries
Don't miss out on the latest news and information.