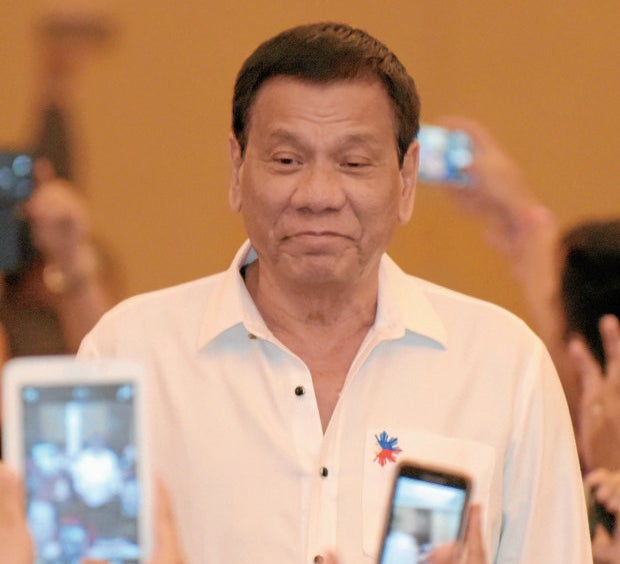 Philippines President Rodrigo Duterte looks on as he meets with members of the Filipino community in the Cambodian capital Phnom Penh on December 13, 2016. Duterte is on a two-day state visit to Cambodia. / AFP PHOTO

President Rodrigo Duterte frequently makes controversial comments that his aides later walk back, attribute to “frustration,” or dismiss as “hyperbole.”

Sometimes, he himself quashes his disagreeable comments as jokes.

But he certainly was not joking when he told businessmen in Malacañang on Monday night that he “personally” killed drug suspects when he was mayor of Davao City.

“In Davao, I used to do it personally. Just to show to the [policemen] that if I can do it, why can’t you?” Mr. Duterte said.

“I [would] go around [on] a big bike and I would just patrol the streets, looking for trouble. I was really looking for an encounter [so I could] kill,” he said.

With the President visiting Cambodia, Malacañang was quiet on Wednesday.

But Justice Secretary Vitaliano Aguirre II was around and when sought for comment, he said Mr. Duterte’s statement about personally killing criminals was hyperbole.

Hyperbole is an exaggerated statement not meant to be taken literally.

In his speech, however, Mr. Duterte said he was “not trying to pull my own chair,” meaning he was not bragging or exaggerating.

But Aguirre said Mr. Duterte was.

“He had said that in the campaign … the President always speaks in hyperbole, always exaggerated just to put his message across,” Aguirre said in an interview at the Senate.

But even if true, he said the President might have killed as a just act, when he was “forced” to take a life.

“He had said he shot someone who had kidnapped, raped and they had guns … To disable them,” Aguirre said.

“It doesn’t mean that just because you killed a suspect, there was a violation of laws. It could be done with a justifiable cause or circumstances as a public officer … in order to arrest, but the suspect fought back, so [Mr. Duterte] must have been forced to kill,” he said.

Nearly 6,000 people have been killed by police and unknown assailants since Mr. Duterte launched his war on drugs after taking office on June 30.

The killings are similar to the extrajudicial killings in Davao City carried out by a so-called death squad during Mr. Duterte’s reign in City Hall there.

Confessed hit man Edgar Matobato, who claimed to be a member of the assassination squad, testified in the Senate in September that he saw Mr. Duterte empty two magazines of an Uzi machine pistol on a Department of Justice employee.

The Senate committee on justice and human rights, however, set aside Matobato’s testimony and concluded its probe of the killings in Mr. Duterte’s war on drugs saying it found no clear proof that the slayings were state-sponsored.

Sen. Richard Gordon, the committee chair, said Mr. Duterte must have had a reason for his public admission to taking lives.

“If it was self-defense, he has [no liability]. If he really killed, he is liable, but there is nothing like that coming out. The President is prone to making what those in his Cabinet say are ‘exaggerated statements,’” Gordon said.

He said Mr. Duterte’s admission may not be used to impeach him, adding that those who would like to press charges against the President could do so only after his term had ended.

“So today, I was surprised to read that in the papers. I don’t know in what context, I don’t know if that was just a joke. That’s surprising to me,” he added.