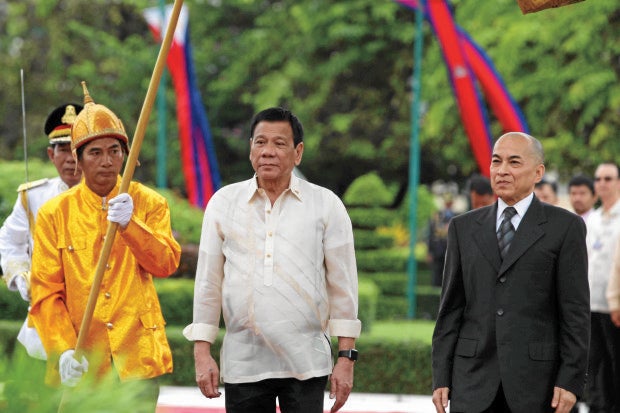 President Rodrigo Roa Duterte is welcomed by the King of Cambodia Norodom Sihamoni upon his arrival at the Royal Palace in Cambodia on December 14, 2016. ACE MORANDANTE/Presidential Photo

PHNOM PENH—President Rodrigo Duterte said on Tuesday night that he would not tolerate corruption in the government even if his own friends were dragged into it. Even the superiors of those involved may have to go.

Mr. Duterte made the assertion amid allegations that two Bureau of Immigration (BI) officials, who happen to be his fraternity brothers, received P50 million from Macau-based gambling tycoon Jack Lam in exchange for releasing his detained Chinese employees found to have violated immigration laws.

The two officials have denied that any extortion took place, saying they tried to entrap Lam who operated online gaming at Fontana Leisure Parks and Casino at Clark Freeport in Pampanga province.

Mr. Duterte did not refer to the controversy in his speech before the Filipino community in Cambodia, but he warned corrupt officials in government anew that he would show them no mercy.

As of yesterday, Malacañang said it had not received Aguirre’s letter on the BI officials.

“Corruption, it will stop. I will not forgive anyone, not even my friends. It will stop,” Mr. Duterte said before some 1,000 Filipinos in the Cambodian capital.

He indicated that the superiors of those who committed corruption might even have to go as well.

“If something happens and it’s under you, I am sorry, maybe even you would have to resign because that is what I had promised,” he said.

According to him, he is not the “very honest” type, but at 71 years old, this is his “last hurrah.”

He said he just wanted Filipinos to get a respite from the corruption problem.

The President also promised harsh punishment for government personnel who would be the subject of complaints through the 8888 hotline, threatening to kill them if they refused to leave their positions.

He encouraged people to use the complaint channel.

“You can name them. You don’t have to include your name and I will take it from there. I am like that. And for me, it has to be dismissal. I will not be content with suspension. Dismissal. If you do not want to leave your job. Then I will kill you. It’s like that,” he said.

He also called on Filipinos to learn to be assertive when faced with unreasonable demands, such as when unscrupulous customs officials harass them.

It’s not a trait common to Orientals, but is strong in the western world, he noted.

On Mr. Duterte’s statement that even the superiors of those who commit corruption would have to go, the President’s spokesperson Ernesto Abella said he was not necessarily referring to Aguirre.

Read Next
Lanao execs nix plan to arm residents vs Maute
EDITORS' PICK
Geek out at TOYCON 2022 powered by Smart Signature
UK’s Boris Johnson will resign, BBC reports
High inflation: Your P1 is now worth only 87 centavos
High-risk pregnancy: Reducing your risk is in your hands
Unemployment rate up to 6% in May
House energy committee chair Arroyo bats for cheap electricity
MOST READ
Suspect in grisly killing of missing woman in Bulacan arrested
Kim Atienza’s daughter flaunts bikini body in response to critics of her ‘revealing photos’
Cop slain in Isabela ambush
FDA probes popular Filipino noodle brand for ‘high level of ethylene oxide’
Don't miss out on the latest news and information.