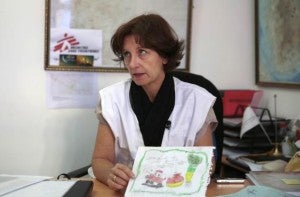 In this Oct. 4, 2016 photo, the head of the Medecins Sans Frontieres (MSF) mission in Yemen, Colette Gadenne, points to a map during an interview with The Associated Press, at the MSF office in Sanaa, Yemen. In the air campaign by Saudi Arabia and its allies against Yemen’s Shiite rebels, rights experts say there has been a pattern by the Saudi-led coalition in depending on faulty intelligence, failing to distinguish between civilian and military targets and disregarding the likelihood of civilian casualties. Experts say some of the strikes likely amount to war crimes. (Photo by HANI MOHAMMED/AP)

RIYADH, Saudi Arabia — Saudi Arabia’s King Salman vowed on Wednesday to prevent other nations from intervening in neighboring Yemen, where it has been at war with Iranian-backed Shiite rebels since March 2015.

The king’s speech comes as UNICEF has renewed its warning of a humanitarian crisis in Yemen with a new report showing that the number of children suffering from severe malnutrition is 200-percent higher than in 2014.

“Malnutrition in Yemen is at an all-time high and increasing,” said Meritxell Relano, UNICEF’s acting representative in Yemen. “The state of health of children in the Middle East’s poorest country has never been as catastrophic as it is today.”

UNICEF said on Monday that nearly 2.2 million children in Yemen are acutely malnourished and that at least 462,000 children suffer from Severe Acute Malnutrition (SAM).

The agency said that the rebel stronghold of Saada province has the world’s highest rate of stunted growth among children, with an “unprecedented eight out of 10 children in some areas being chronically malnourished.”

International organizations have demanded the Saudi-led coalition lift an air and sea embargo imposed in the beginning of its war, to facilitate access to food and basic necessities. The coalition denies any prevention of food or commodities and has previously said that it only inspects ships for to prevent weapons from being smuggled to the rebels.

The Saudis have also faced accusations of war crimes in Yemen as warplanes have caused mass civilian casualties. On Tuesday, The United States decided to halt some of its arms sales to the kingdom because of such allegations. Over 4000 civilians have been killed, and the UN said that 60 percent were killed because of airstrikes.

The king made no mention to the US decision but said that Yemen’s security is “the kingdom’s security” and said that he will not permit anyone to interfere in Yemen’s affairs. Saudi Arabia views Iran as its main regional rival, and the two nations support opposite sides in the wars in Yemen and Syria.

Salman said he would not allow Yemen to become the “headquarters or a corridor to any country or party targeting the security of the kingdom or the region.”

The televised speech at the start of a meeting of his top advisory council on Wednesday included no major policy changes despite regional upheaval and the economic challenge posed by low global oil prices.

Salman said Saudi Arabia remains committed to diversifying its economy based on the Vision 2030 roadmap, which includes slashing public spending, reducing reliance on oil revenue and boosting employment in the private sector.