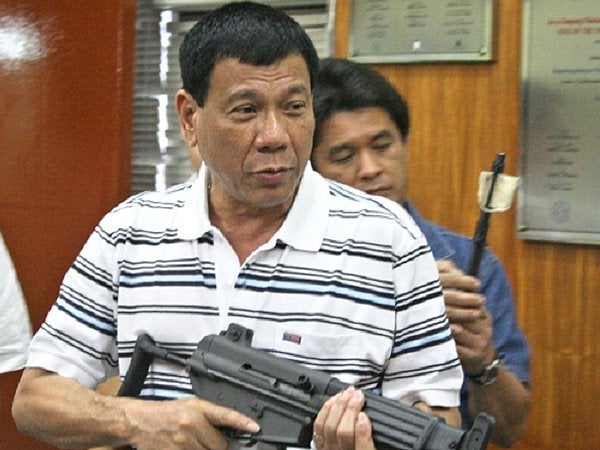 Just because you kill suspects does not mean you have violated the law, Justice Secretary Vitaliano Aguirre II said of the President Rodrigo Duterte’s fresh admission that he personally killed drug suspects as mayor of Davao City.

Aguirre noted Duterte’s statement during the campaign period that he had killed kidnappers, who refused to surrender to him.

“It could be done with a justifiable cause and justified circumstances as a public officer in order to arrest pero lumaban yung suspect. He must have been forced to kill.”

Asked again if he would investigate the President, Aguirre said he was not in a position to do it.

In a speech Monday night in Malacañang, Duterte admitted that he “personally” killed drug suspects when he was mayor.

“I know it because—I am not trying to pull my own chair—in Davao I used to do it personally. Just to show to the [policemen] that if I can do it, why can’t you?” he said.

“I go around Davao (on) a big bike and I would just patrol the streets looking for trouble. I was really looking for an encounter to kill,” the President added. CBB

Read Next
No number coding on buses 2 days before Christmas, New Year – MMDA
EDITORS' PICK
Over 3 Million worth of prizes to be won at Smart Padala’s SENDali Manalo Promo!
‘Not yet the end’: Lawyer says Marcos Jr’s DQ cases to take lengthy process
Critical scenario: 3 Comelec vacancies just 3 months before elections
Acer starts the year off strong with the Aspire Vero National Geographic Edition
The best of bayside and city living at SMDC’s Sail Residences
PH logs 37,070 more COVID-19 cases; over 33K others recover
MOST READ
Duterte asks: ‘Is COVID-19 airborne?’ Duque blames spread on ‘token compliance’ with rules
Morissette Amon recovering after confinement for diverticulitis, tests positive for COVID-19
‘Not yet the end’: Lawyer says Marcos Jr’s DQ cases to traverse lengthy process
Marcos camp ‘extends hand of unity’ after COC cancellation bid is thrown out
Don't miss out on the latest news and information.