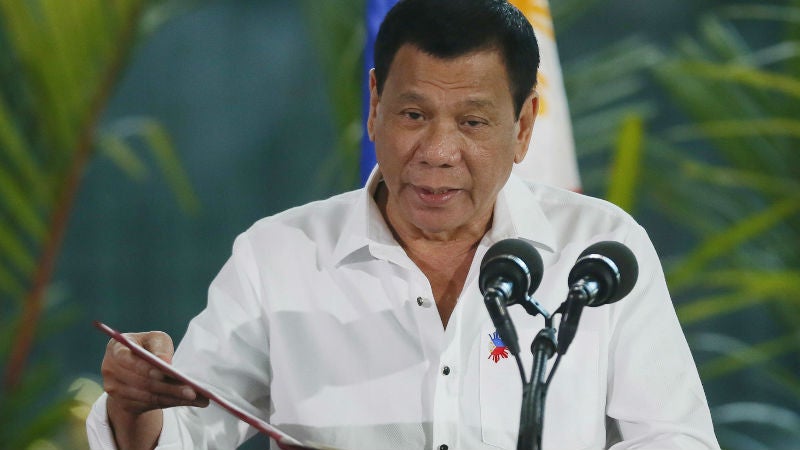 Philippine President Rodrigo Duterte delivers a statement prior to his departure for Cambodia and Singapore for official visits to the ASEAN neighbors, Tuesday, Dec. 13, 2016, at the Ninoy Aquino International Airport in Pasay city, south of Manila, Philippines. Duterte said his trip to the ASEAN neighbors is in preparation for the upcoming ASEAN summits which the Philippines is hosting late next year.(AP Photo/Bullit Marquez)

Just hours after declaring he was “not a killer,” President Duterte told a group of business leaders on Monday night that he “personally” killed drug suspects when he was mayor of Davao City.

Mr. Duterte said he rode a big bike—presumably his street-eating Harley-Davidson motorcycle—to patrol the streets, spoiling for a fight and seeking to kill.

He was defending his scorched-earth policy in the fight against illegal drugs for which he had drawn criticism from the United Nations, United States, European Union and international human rights groups.

Mr. Duterte said one-third of the nearly 6,000 drug suspects slain in his war on drugs were killed in legitimate police operations.

“I know it because—I am not trying to pull my own chair—in Davao I used to do it personally. Just to show to the [policemen] that if I can do it, why can’t you?” Mr. Duterte said during the Wallace Business Forum in Malacañang.

“I go around in Davao (on) a big bike and I would just patrol the streets and looking for trouble. I was really looking for an encounter to kill,” he said.

For that approach to fighting crime in the Philippines’ “murder capital,” Time magazine called Mr. Duterte “The Punisher” in an article in 2002.

The magazine echoed the moniker in another article after Mr. Duterte’s election as President in May.

In his speech to businessmen on Monday night, Mr. Duterte said allegations of human rights violations hurled at him by local and international groups would not stop him from pursuing his campaign against the illegal drug trade.

“If I am afraid [and] stop because of the human rights … sorry, I am not about to do that,” he said.

“So fine. Oust me? Good. Assassinate me? Better. I have this migraine every day [anyway],” he said.

After drawing fire for his outrageous comments, Mr. Duterte would later dismiss them as a “joke.”

Or his aides would explain his comments as “hyperbole,” even though his comments were quite plain statements.

Shortly before addressing the businessmen, Mr. Duterte rebuffed insinuations that he was a “killer” for condoning extrajudicial killings in his war on drugs and encouraging police to kill suspects who would resist arrest.

“I am not a killer. I do not relish or enjoy [seeing] a Filipino sprawled there with all the blood,” Mr. Duterte said in a speech during The Outstanding Filipino Awards for 2016 in Malacañang.

“I do not want you to die, that is not my order,” he stressed. “And even if Congress would give me a carpet authority to kill everybody, I won’t have the time nor the bullets to do it.”

He added: “You know every time I decide on things to buy guns and bullets, there is always in my mind that these things would be used against the Filipinos …. I don’t enjoy it.”

As in his previous speeches, the President took out a sheaf of documents and showed it to his audience during his talk at both events in the Palace.

“This [is] the drug industry in this country,” Mr. Duterte said. “I would like to get advice. What should I do? I really want to cry. I feel as if I can’t do it.”

He said he gave copies of the documents to House Speaker Pantaleon Alvarez and Senate President Aquilino Pimentel III to seek help in dealing with the drug menace, which he described as “a threat to national security.”

But Mr. Duterte has some ideas of his own, including making the rich adopt drug addicts.

He also had a few words for the Catholic Church, one of the strident critics of his bloody war on drugs: “Check out your flock and look for the lost sheep.”

“They say, ‘Why did Duterte have to kill them? Why not just send them to [rehabilitation centers]?’ Son of a bitch. They did not know I have nowhere to go,” he said.

“If you want to help me, make available your houses. To the rich people, those who have mansions with four, five or six rooms, give up one of the rooms. Adopt an addict and see what happens,” he said, eliciting giggles from his audience.

For the nth time, he said the Aquino administration left him funds good only for maintenance and operations, and nothing for building rehabilitation centers for drug addicts.

“So to the bleeding hearts, if you really want to stop the violence, do it. You adopt an addict and share the love [with] your fellowmen,” he said.

“It’s for you to understand the perdition of a drug addict. If you want, I will start with those from Tondo. Choose what you want, boy or girl. It’s just the same [anyway]. If they go crazy, they will stab you dead. It leads to a massacre. Do you think it’s that easy?” he said.