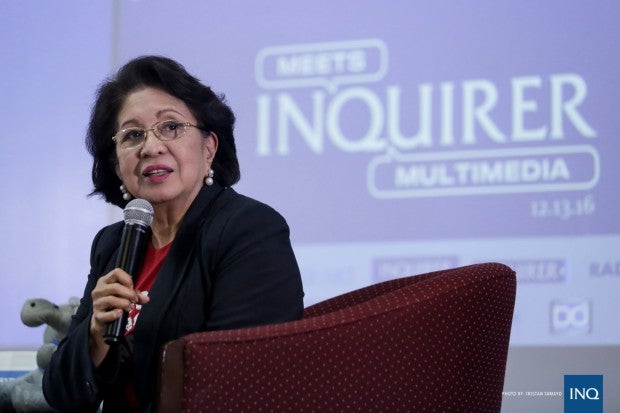 “Unpresidential” but “not illegal.”

That was how Ombudsman Conchita Carpio Morales described President Duterte’s notoriously foul language, which includes curses at world leaders, threats against criminals and catcalls at women, saying even his repeated threats to kill drug users and dealers were not illegal unless he makes it happen.

“That’s very unpresidential, of course. Unless he modifies his style, that remains to be his style. I’m sure that’s not your style, neither anyone’s style here, neither my style,” Morales said at the Meet Inquirer Multimedia forum on Tuesday.

“Of course, if you are a Christian and you hear those things, you’re of course alarmed because (of the words) ‘I will kill, I will kill.’ But that is mere intention. Whether or not he’ll carry it out, or he has carried it out, that’s a different story,” she said.

Morales said she had not raised this matter with the President.

“In the few times I’ve met with him, we never discussed this. We just exchanged pleasantries and all that. It would be presumptuous of me to raise that to him. If he opens up, then I will say what is my piece,” she said.

“I’ll keep mum, not because I’m scared, but because I don’t think it’s proper for me to raise it,” she added.

Could the President be held liable for extrajudicial killings for his war on drugs when his term ends? Morales did not give a direct response, saying the question was “hypothetical.”

Morales, whose term would have ended by then, said the Office of the Ombudsman is committed to apply due process and the rule of law.

Appointed by former President Benigno Aquino III in 2011, Morales’ seven-year term ends in July 2018, ahead of Mr. Duterte who will remain in office until June 2022.

“If he steps down and we investigate the case and we find that he committed a crime, then he will already be stripped of immunity and we will have him indicted in court,” she said.

The President’s verbal threats that he will kill drug dealers and users were not against the law per se, according to Morales.

“It’s not illegal to say I will kill you. No, it’s not,” Morales said. “That’s a mere statement. In the context in which it is said, we have to look for the circumstances surrounding that. ‘I’ll kill you’ [is] probably just a statement, unless there is probably an overt act showing that you intend to kill (someone).”

Morales did not comment when asked whether the President’s threats could encourage law enforcers to terminate targets of their Commander in Chief.

“That is in relation to what he also said that he is going to protect the policemen, and the analysis is that it will only embolden policemen in killing. But as I said, cases might reach us, and I will be saying that I’m prejudging the cases,” Morales said.

“[I’m] not going to answer that because cases might reach us, albeit I am not going to participate because I am going to inhibit,” she added.

Morales had declared earlier this week that she would personally keep off cases filed with her office involving the President, being an aunt-in-law of his daughter, Davao City Mayor Sara Duterte Carpio.

The death toll in the war on drugs has topped 5,000, including more than 2,000 killed in police antidrug operations and over 3,000 other killings carried out by suspected vigilantes or rival drug syndicates.